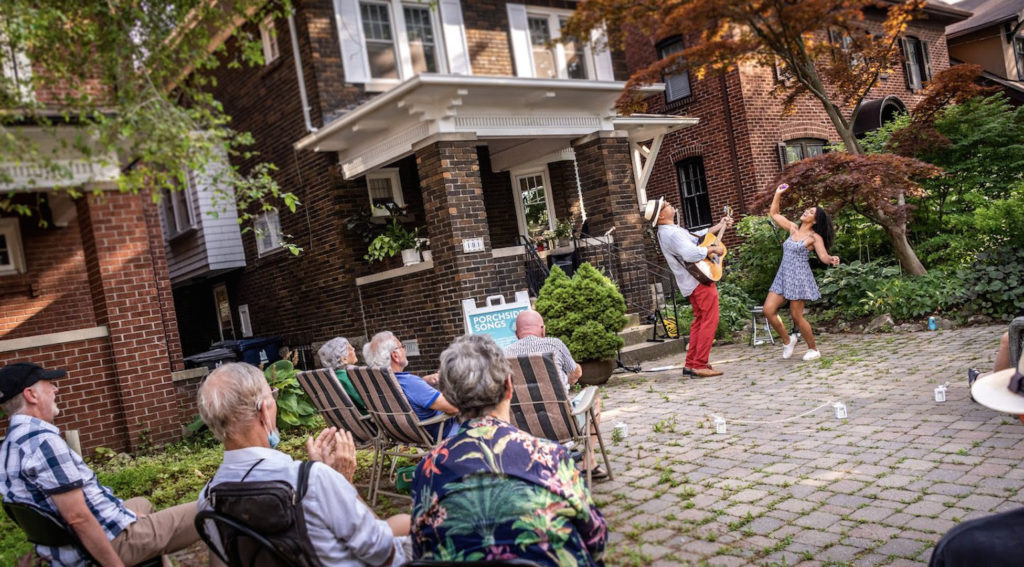 Looking to be entertained by a little song and dance from the safety of your own home? A Toronto theatre company has just the thing. The Musical Stage Company is reviving its popular Porchside Songs coming to a front yard or porch near you this summer — maybe even yours.

The company is reviving the program after a year of sold-out performances last summer.  The live musical cabarets are physically distanced mini-concerts performed outdoors on the front porches and yards of Toronto.

The 2021 line-up expands from three cabarets to four this year and features some of the city’s best musical theatre talent.

Last year, the Musical Stage Company performed 80 Porchside Songs concerts to 1,500 people in the city as well as one performance from a dock in Muskoka with guests watching from their boats.

Here is the Musical Stage Company rundown of the four 40-minute Porchside Songs cabarets available to book this spring and summer beginning June 8. Specific dates and tickets will be announced May 12.

Sara Farb and Britta Johnson bring you a captivating concert, celebrating their love of songs by, for, and about complicated women. They’ll perform original music, including work from their upcoming musical KELLY v. KELLY, as well as beloved pop and folk songs by masters of the sad lady music genre. Farb, who was last seen in Harry Potter and the Cursed Child on Broadway, and Johnson, a composer and songwriter heralded as “Canadian musical theatre’s next great hope,” have been friends and collaborators since 2014 and ironically find the most glee while making sad lady music.

A CRACK IN THE WALL

Jewelle Blackman and Evangelia Kambites take you on a musical memoir exploring themes of love, loss, life and everything in between. Having worked together on the Canadian Premiere of Hadestown and Soulpepper’s The 27 Club, this dynamic duo is not only exceptional storytellers in song but also seasoned multi-instrumentalists. Guaranteed to enlighten and entertain with music ranging from Nat King Cole and Gnarls Barkley to their own original tunes, Blackman and Kambites will leave you believing that “a crack in the wall, doesn’t always mean it’s about to fall.”

Siblings Gabi and Jake Epstein take you on the open road with their heartwarming story of music and family. From epic road trips in the backseat of their parents’ minivan to seeing each other perform on the stages of Stratford and Broadway, music has always been the driving force behind their unique and special bond. With an acoustic playlist that includes everything from Beatles to Barbra, the Epsteins will have you singing along, reminding us all that family isn’t just an important thing — it’s everything.

From Jon Bon Jovi to Gloria Gaynor, Saccha Dennis brings you into her reimagined world by hearing classic songs done with a jazz, funk, and bluesy twist. She was last seen in Come From Away, Broadway’s hit show, running at Toronto’s Royal Alexandra Theatre, where she played Hannah and others. A Musical Stage Company debut, Dennis is accompanied by the multi-talented David Atkinson. Come experience the retelling of some of your favourite songs with some of Toronto’s most dedicated storytellers.