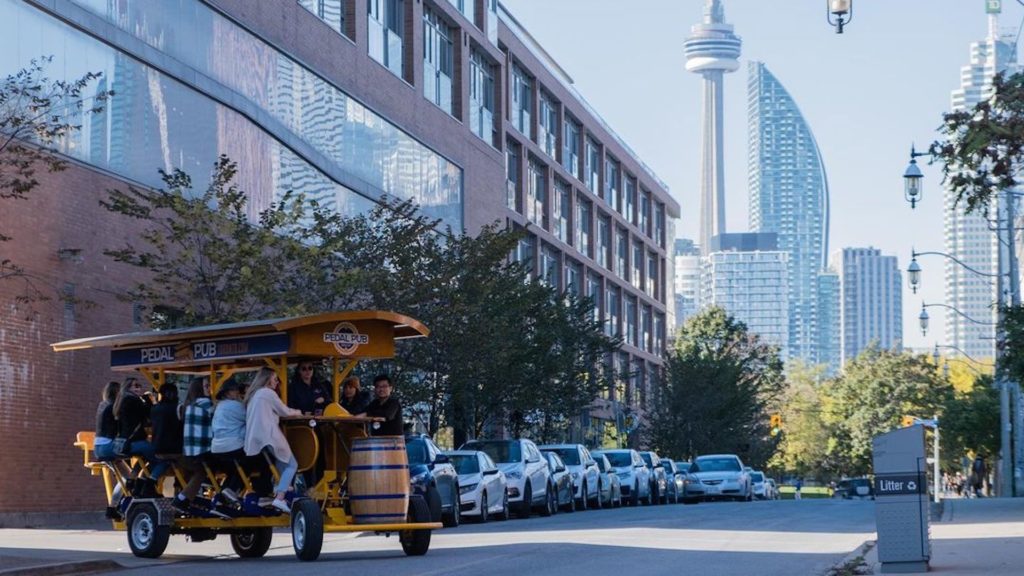 Toronto is the latest city to give pedal pubs the green light.

On Friday, the city’s government and licensing committee gave the go-ahead to the 16-passenger group bikes, with eight businesses set to operate in the downtown core.

Popular in a number of Canadian cities including Ottawa and Calgary, and a fixture in much of the United States, the pedal-powered patio is essentially a party bike that is a way to take passengers on a boozy tour around the city.  While alcohol is usually consumed onboard, in Toronto, as with some other Ontario locations, no liquor will be served. Instead, bikes will take riders on a two-hour jaunt, which will include two to three stops at local drinking establishments such as breweries, bars, and restaurants.

Although the final decision won’t be made by city council until May 11, the party bike company Pedal Pub has already launched a Toronto iteration on its website. Interested cyclists can sign up to be notified when bookings open.

The news that these bar-hopping bikes might soon be hitting Toronto streets is being met with mixed reviews.

Roselle Martino, vice-president of public policy for the Toronto Region Board of Trade is a strong supporter, especially as the city tries to recover post-COVID.

“Pedal pubs would be an economic multiplier for the city, drawing new visitors to food and drink establishments that have been among the hardest-hit businesses during the pandemic and exposing visitors to neighbourhoods in the city that they may not otherwise visit,” she said in a letter to the city.

Torontonians have also not been shy to voice their opinions on Twitter.

“For anyone talking about this today, this is quite literally the least fun way possible to spend a day of drinking,” one user posted.

“And there is no drinking on the pedal pub. Your City Council at work, ladies and gentlemen…” wrote another.

One user suggested that the city allow more Toronto bars and restaurants to expand their outdoor dining space.

These are lame even if you can drink on board. Expand CafeTO or something but trust me, I’ve been to Nashville, these are kind of roving garish nightmares

Originating in the Netherlands in 1996 by brothers Henk and Zwier Van Laar, the bikes are now shipped all over the world. Over the years, the party bike has made headlines after a number of accidents were reported. One most recently involved the driver or “pilot”  being cited for an alleged DUI after the pedal pub he was operating tipped over. All 15 people on board were injured. While the passengers are in charge of pedaling, the driver controls the steering.

Although the Toronto route has yet to be announced, the price has: You can reserve a whole bike starting at $599, while individual seats can be purchased at $49 per person.