Peace, love and a little bit of free literature - Streets Of Toronto
Skip to content 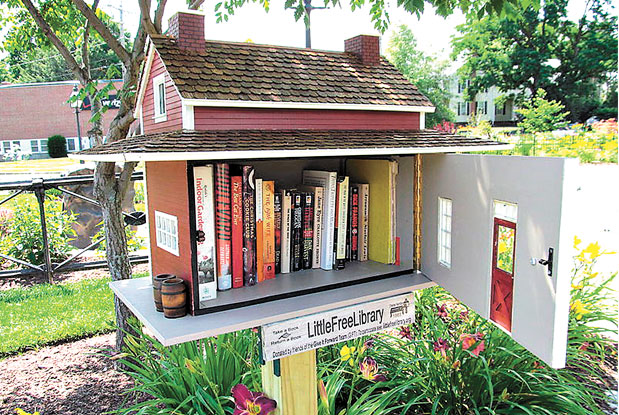 Bill Wrigley’s miniature library is perched outside his home on a white post, like a large mailbox. It has two shelves filled with books and a single swinging door. Instructions on the top say “Take a book — Return a book.”

Wrigley’s library, at 304 Lee Ave. in the Beach, is part of a growing international community of take-a-book-leave-a-book libraries called Little Free Library.

The movement began in Wisconsin in 2009. It has since spread, putting more than 3,000 libraries similar to Wrigley’s all over the world, including far-flung countries such as the Republic of the Congo, Pakistan and India.

People can design their own boxes however they want or order them online, but as Wrigley says, “The concept is the same: people come around and they take a book. If they finish it, they bring it back. If they don’t bring it back, maybe they bring a different book back, and it’s like a rotating library.”

Every time someone walks past Wrigley’s house, the library is different and new. Wrigley’s library is a hit — like many across Toronto and the country.

“The interesting thing is the kids just love it. They come around in cars from who knows where with their parents and they pick up books. They’re very, very popular,” he says.

Wrigley advocates on behalf of Little Free Library in Toronto. He oversaw the creation of 10 in his own neighborhood, 25 in Toronto and more than 40 in the GTA.

He says Little Free Libraries have benefits that set them apart from city libraries.

“The beautiful thing is it’s open 24 hours a day, it’s open seven days a week, you don’t have to have a library card, and you don’t get fined if you bring your book back late.”

Wrigley has more than 250 extra books in his basement to keep the library stocked. He says once a book is in the library, “it no longer belongs to [him], it belongs to the people who live in Toronto.

To find a Little Free Library near you, check this map