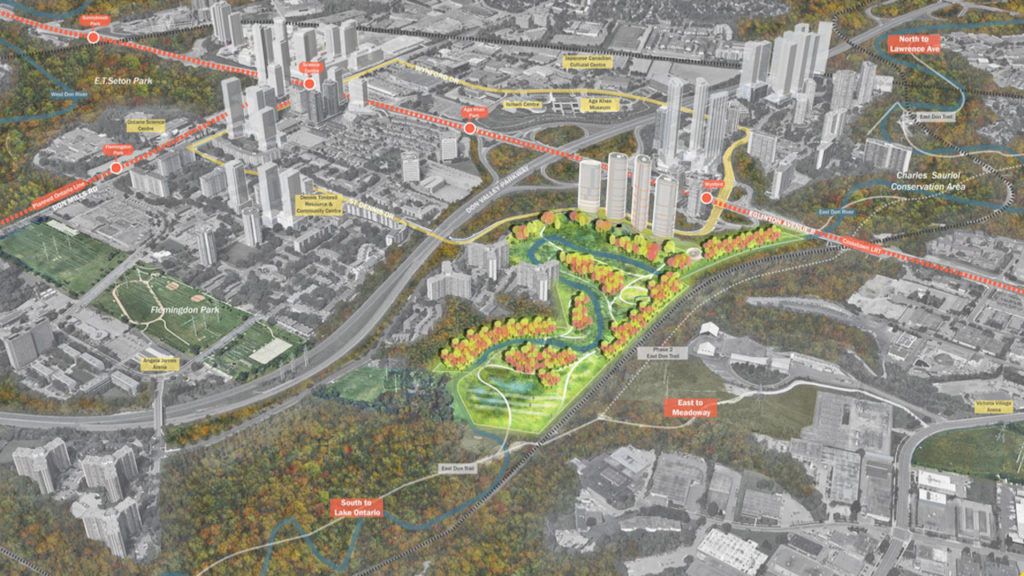 Joe Valela’s idea to redevelop the Flemingdon Park Golf Club into a massive public park and residential towers came to him four years ago while he was playing a round at the privately owned nine-hole golf course in the Don Valley. “I was teeing off on the first hole, and I had got a notion driving in that maybe there’s land here that could be developed,” the president of Tercot Communities Limited tells Post City.

That notion eventually developed into Don Valley ReConnects, Tercot’s recently revealed plan to partner with developers Cityzen and Greybrook to try and build four high-rise towers on the edge of the course, setting aside the remaining 40 acres for a huge public park. “This allows an opportunity for the city to work with us and to activate this park that is going to be larger than Trinity Bellwoods,” says Valela, who explains an agreement has been struck with the owners of the golf course.

The developers plan to submit a formal application to the city in the new year, but many details — including whether the towers will be condos or rentals or both — are still being worked out, says Craig Lametti, partner at Urban Strategies Inc, planning and urban design consultants on the project. “We’re working through those scenarios right now, but there will be a component of affordable housing on-site,” he tells Post City.

The current plan proposes about 2,500 residential units across the four towers, which range from 42 to 56 storeys in height, Lametti confirms. Because much of the golf course site is undevelopable due to factors such as flood plains and slopes, the towers have been pushed to the northern border of the site along St. Dennis Dr., just south of Eglinton Avenue East and the under-construction Crosstown LRT line.

Four years of land studies have informed the proposal’s layout. “One of the concerns that I had right off the bat was, is there a possibility to actually build here — is it in a flood plain?” However, results from technical analysis work, including hydrological and geotechnical studies, erased Valela’s concerns: “We’ve done all the studies and feel very confident that you could build there safely and that it’s not going to be a flooding issue.”

On a design level, the hope is to achieve a development that’s as unintrusive to the natural backdrop as possible. “What we have are four towers that are sort of slightly rounded and sculpted, and they sit on a very thin, porous base,” says Lametti of the design Hariri Pontarini Architects has created.

“It’s not like one of those large podiums that you see on developments,” Lametti adds. “The intent is to blur the lines between the valley and St. Denis Drive.”

The application process, as well as talks with the community and various stakeholders, will determine what, exactly, the park includes. However, Lametti provides some insights into features that might be incorporated. “We’re looking at not only new trails and places for the community to gather but also more trees, native vegetation, new wetlands, enhanced riparian zones, which are the zones along the edge of the river,” he explains. “All of those elements, we think, have an opportunity within this parkland.”

Conversations will also decide the park’s ultimate ownership status. “We’re planning on having discussions with the City of Toronto, the Toronto and Region Conservation Authority, and First Nations rights holders, amongst other organizations,” he says, noting any of those groups could be given the land.

Ahead of any formal submission to the city, the community-engagement process is beginning. The development team is hosting an event at 10 Gateway Blvd. today (Nov. 9) at 6:30 p.m. to discuss reimagining Flemingdon Park Golf Course, which will continue to operate pending the project’s approval.

Lametti describes the proposal as a “win-win” for addressing two core issues at once. “We have this housing shortage, but at the same time what we see in places like Toronto are neighbourhoods that feel they’re being overwhelmed by new development and that the public infrastructure isn’t keeping up,” says Lametti. “Yes, we’re delivering much-needed housing — housing that’s a short walk from new rapid transit — but in doing so we’re delivering 40 acres of new parkland for the community.”