Paul Gross on his transition from beloved Mountie to his latest film, Hyena Road - Streets Of Toronto
Skip to content 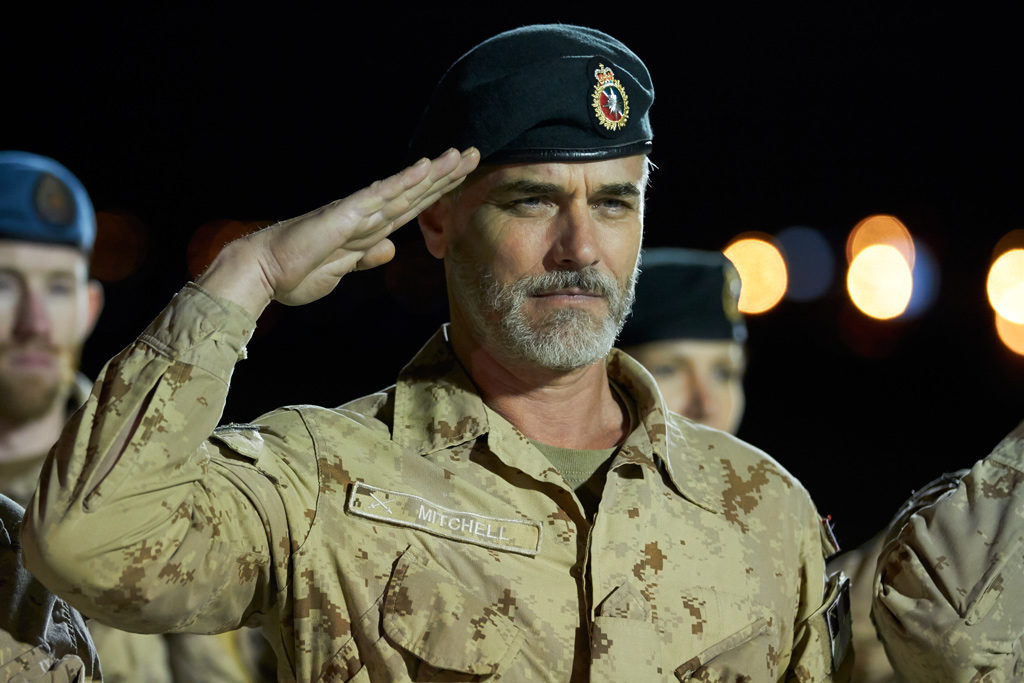 During his long career, Toronto-based actor and director Paul Gross has become one of Canada’s most familiar faces. He has appeared in hit TV shows, been on Broadway, tackled Hamlet at Stratford and writes, produces and directs his own films.

But it seems Gross is not a man who likes to rest on his laurels and is still up for a challenge.

That’s if his latest endeavour, war movie Hyena Road, is anything to go by. About five years ago, as the Canadian military mission in Afghanistan was approaching its final chapter, Gross was invited to visit the troops stationed in the country.

At the time, Kandahar airfield was home to the busiest airstrip in the world as the U.S.-led coalition tried to install some order in a country racked by years of war and Taliban rule.

Embedded with Canadian troops, Gross recalls the first foot patrol he went on as “exhausting.” Five hours of moving around in the heat, aware that in that land of fantastically complex loyalties, danger doesn’t wear an enemy uniform. His adrenaline spiked at the slightest hint of concern.

“I thought I’d run a marathon by the time I got back to forward base,” says Gross.

The next morning, a soldier called Gross over to watch the controlled detonation of an improvised explosive device just outside the base perimeter, about 75 feet from the path his patrol had taken the day before. Since his first visit to the country, Gross has become mesmerized by Afghanistan and the role Canadian troops played in the 13 years they were engaged in counter-insurgency operations. Hyena Road, which he wrote, directed and stars in, is based on what he saw during two visits to Afghanistan.

“I found that to be mesmerizing. On a personal level, putting myself into the shoes of soldiers and thinking what it is we are asking them to do and the cost that it exacts, not only on them, but on their families,” he says. “It seemed to me that we’ve got to know that.”

In the tense drama, which premiered at TIFF and is in theatres October 9, Gross plays a Canadian military intelligence officer who teams up with a master sniper commander to hunt for a legendary mujahedeen fighter known as “The Ghost” who is thought to have returned from seclusion. It’s a tour, not only through a war zone, but through the lives of those fighting in it.

The $12 million film is a very different creature from Gross’s last war movie, Passchendaele, and the fact of making it was somewhat unexpected for him. After filming the critically acclaimed First World War drama, Gross wasn’t keen on doing another war movie.

“They are just so complicated and expensive and difficult to do,” he says. It’s clear from talking to Gross, however, how strongly he feels that the stories from Afghanistan need to be told. Although Gross speaks carefully and doesn’t seem a man given to wild pronouncements, during the conversation, he returns a number of times to the idea of how the conflict affected the soldiers themselves and the difficult tasks they are asked to do.

“What we are asking fairly young soldiers to do is not only be capable of leading a small group of people, let’s say a platoon, but you’re also becoming the leading edge of the foreign policy because you’re the one who sits down at a meeting with the elders in a village to discuss what must and must not be done,” he says.

Gross is from a military family himself with his own father being in the Canadian Army. As such, although Gross was born in Calgary, he spent much of his upbringing moving around.

He has called Toronto home since he was a teenager. He moved here after his father finished a posting at the Canadian Embassy in Washington, D.C., and Gross entered Earl Haig Secondary School for, as he puts it, “the penal colony year,” in Grade 13. At that time he was already well on his way to becoming an actor and would go on to study drama at university.

It was in the mid-1990s that Gross became an internationally recognizable face playing RCMP officer Benton Fraser in the wildly popular Due South.

Although calling it “amazing” and “humbling” to have been part of a show that was so widely embraced, Gross admits to being as mystified as anyone about why it took off in places as diverse as Europe and Iran.

“I don’t suppose anybody can ever figure out why some shows just grab audiences and others don’t, it’s very mercurial that way,” he says, speculating that the idealized version of Canadians depicted in the show seemed to catch attention in other cultures. “Then, I can only think it’s the dog. People really liked the dog,” he adds. Gross is half of one of the most accomplished showbiz couples in Canada. His Gemini Award–winning wife, Martha Burns, is a founding member of  Soulpepper Theatre Company. The pair met back in the ’80s when they were cast in a play together. By 1988, they were married and now have two grown-up children.

These days, the pair splits their time between New York City, where they have an apartment, and their new downtown T.O. home. Despite being one of the most recognizable couples in Canada, Burns and Gross keep a low profile, quietly getting on with their lives together for the past three decades. The couple will shortly be reuniting onstage in Toronto to perform together for the first time since Slings & Arrows in 2006. The pair will be performing in the Bruce Norris play Domesticated, in which Gross plays a philandering politician whose infidelity causes his marriage to explode in a media maelstrom, and Burns plays his long-suffering wife.

“The play opens with him doing one of those horrible press conferences where he admits to an infidelity, begs forgiveness and, as it turns out, he has been having sex with a prostitute who has fallen or been pushed and hit herself on something and is now in a coma,” says Gross. “Of course, the marriage explodes. You follow all of that inside the family life as its blows up. It’s a very interesting, very incisive and uncomfortable play but also extremely funny.”

As for how he feels working with his wife onstage, Gross says, “She’s a much better actor than I am, so I think it will be great fun, and I will have to try to catch up.” Even after decades in the spotlight, Gross is still finding new challenges.