P.F. Chang’s is about to bring Toronto exactly what it needs: Americanized Chinese food, chain-style - Streets Of Toronto
Skip to content 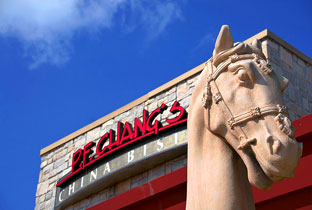 For the uninitiated, P.F. Chang’s is a Chinese “bistro” that has over 200 locations worldwide. Often recognizable from the giant horse statues outside of its entrances, its popularity is such that it has made appearances on South Park. It’s big, and it’s coming to Toronto.

The business announced last year that it would be expanding to Canada, then revealed on Twitter last month that its first Toronto location would be opening in 2012. We weren’t able to immediately confirm exactly when or where the first location would open up.

A quick perusal of the menu reveals pretty standard Asian options: lo mein, mandarin chicken, beef with broccoli and the like. Interestingly, there is also a sizeable gluten free section. But, having never tried the place before, we decided to do the obvious and check Chowhound before judging.

“It was good, it did the job for us. Nothing transcendent, you’ll probably be able to find better, but it was a good meal.”

“With all the choices we have here in Toronto, can’t imagine why anyone would want to eat at PF Changs. It’s not cheap. One would be better off going to Mandarin.”

Mandarin? We have to admit that was the furthest thing from our minds.

UPDATE: the P.F. Chang’s Toronto location will open in the Shops at Don Mills later this summer.