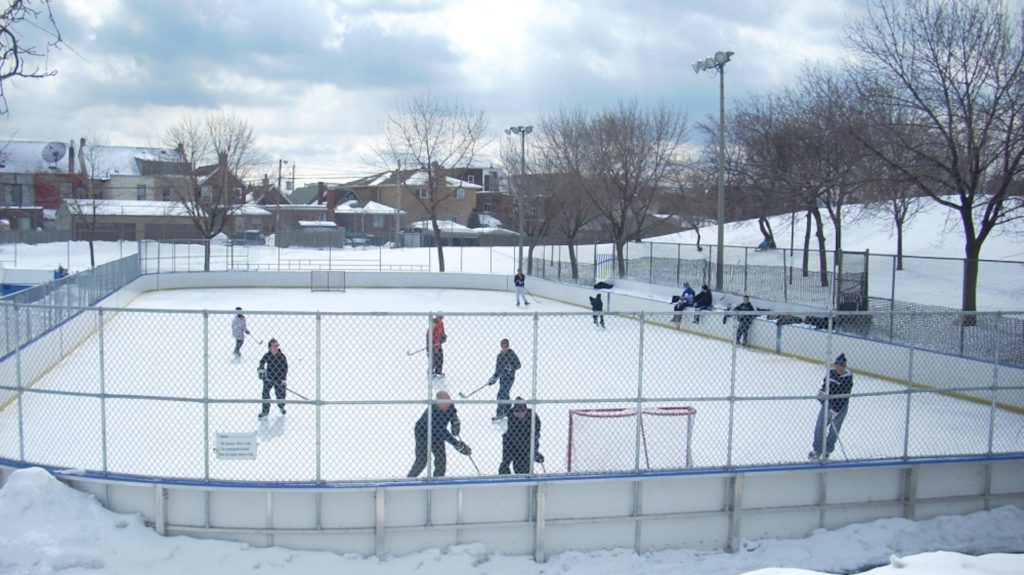 One of the unique aspects of Toronto is the number of free and accessible outdoor hockey rinks that open up in neighbourhoods across the city every winter. The outdoor rinks in the city are legendary. In the east-end, the late, great Gord Downie would hold court in between the pipes at Withrow Park. Eric Lindros and other ex-NHLers can be found in certain North Toronto rinks from time to time. Every day, hundreds of locals hit the ice across the city for a free and accessible game of shinny with a side of social connection and exercise. These rinks have it all, and they are treasured by many.

Now, the city is planning on permanently closing one of those rinks at Wallace-Emerson, and a community movement in opposition of the move is hoping to put those plans on ice.

Jared Westreich, an engineer who works for a medical technology start-up, moved to the west-end neighbourhood in October and hits the ice several times every week to play shinny hockey with anywhere from 30 to 50 other people. When he saw signs that the park was going to be redeveloped he contacted the office of local city councillor Ana Bailão and was surprised to learn that the hockey rink was going to be shut down and replaced with a skating path and a small skating pad that can be closed down for shinny hockey.

“It’s about a third of the size of the current hockey rink, which is already packed with people,” Westreich says. “You could maybe play two on two hockey on the pad, three on three if you’re really pushing it.”

When asking around Westreich learned that not a single person at the rink knew of the plan to not replace the hockey rink.

“I tried to set up a meeting to speak with the city councillor,” Westreich says. “But the message I got was that nothing could be done, the plans were already made up and maybe I could put up a petition.”

Westreich, along with Joe Sismondo and Patrick Meredith-Karam decided to advocate to keep the hockey rink and started a petition on Change.org five days ago, and it has 1,500 signees and counting.

“I’ve been overwhelmed by how many people have signed it,” he says. “And it’s been shared hundreds of times, which means people think it’s important enough to share with their own friends.”

The petition has been posted on Facebook community sites, including one for the Dufferin Grove area, to which Coun. Bailão responded that the rink closure is part of a massive expansion of Wallace Emerson Park. and in place of the hockey rink there will be a skating path as well as a skating path that can be blocked off to be used for shinny hockey.

“Overall, the total skating area is similar in size to the existing skate area at the park today. However, the layout of the skate trail should provide more usable area for more leisure skaters and accommodate more people, as it provides a larger perimeter circuit/loop,” she wrote. “The shinny rink will be smaller than the existing shinny area, and while it won’t have boards, it will be enclosed by concrete seat walls (around 2′ high) and puck backstops.”

Westreich described the councillor’s comments as the same generic response he received when asked about the park.

“It’s really disappointing that’s the response when so many people clearly care,” he says.

Westreich is hoping that the overwhelming response to the petition will lead to a community meeting with the councillor where people can express their views directly.

In the response, Coun. Bailão made it clear that change was not something that she would entertain.

“I can appreciate that you may like the city to reopen and restart the design process for this project, but we cannot accommodate this request. Detailed design and construction documents have been completed for the facility, and the project has been tendered,” she wrote.

Westreich, however, isn’t giving up.

“Although they say it can’t be changed, we’ve learned a lot over the past two years about what our values are and free and accessible recreation is one of those things,” Westreich says. “And the original process didn’t have community engagement as there were only 50 people who filled out the questionnaire. I think a meeting is a reasonable ask.”

Westreich adds that he’s never been involved in local politics, but he sees how much people care about the rink, and the community it fosters. It’s the same for more than 50 neighbourhood outdoor rinks across the city where people gather to play shinny hockey and skate.

Hockey is an expensive sport at an organized level, and these rinks provide access to the sport for those who otherwise might not be able to play at all.

“It’s just awesome,” Westreich says of the city’s outdoor rinks. “I can’t think of too many other cities that have such a great outdoor hockey scene. We need to add to it, not take away.”

To continue on his push to save the Wallace-Emerson hockey rink, Westreich and two friends who have worked on this project together will be at the rink on Saturday, Jan. 22 passing out hot chocolate, and flyers, making people aware of what is happening.