Opening Soon: No One Writes to the Colonel on College - Streets Of Toronto
Skip to content 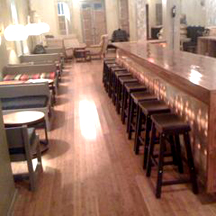 No One Writes to the Colonel, named after Gabriel Garcia Márquez’s novella about an old, forgotten Colonel, is the type of place that just feels, well, familiar.

"We want it to feel a little like home," owner Marty Smits tells PostCity.com.

Smits has poured a lot of himself into the College and Bathurst bar, which lies in the "no man’s land" between Little Italy and Kensington Market.  Along with co-owner Miks Petersons, Smits has done most of the renovations himself and many of the little extra touches dig at his roots.

On the menu are Latvian desserts and drinks — fitting considering both Smits and Petersons are Latvian.  In fact, No One Writes to the Colonel started as a bar in their home country, before its offspring sprouted wings and migrated over to Toronto.

"It played a lot of NIN, it was kind of angsty," says Smits of the original Latvian start-up, which was built on the sense of isolation felt in the novella. The Toronto version, however, is completely the opposite.

Walk in and you’re greeted by a couple of inviting couches flanking a fireplace. Speaking of the old timers, along the walls you’ll find shelves made of 100-year-old barn wood Smits found out by his grandparents’ place.  Along the back wall, where the stage is located, is an impressively mounted Latvian LP collection, complements of Smits’ grandmother.

Meanwhile, the bar is the type of place where people come to have a conversation, while listening to a live jazz trio in the background. Marty, a former DJ, says there will be a rotation of professionals taking to the turn tables, but that the music will be ambient and not meant for dancing.

The menu will offer a selection of deserts, salads, and soups.

Barring any further problems with the sprinkler system, No One Writes to the Colonel will likely open next month.  Marty says he hopes it’s the type of place that just fits with the locals.  The type of place, perhaps, that an old, tired Colonel would love to retire to for a drink and a willing ear.