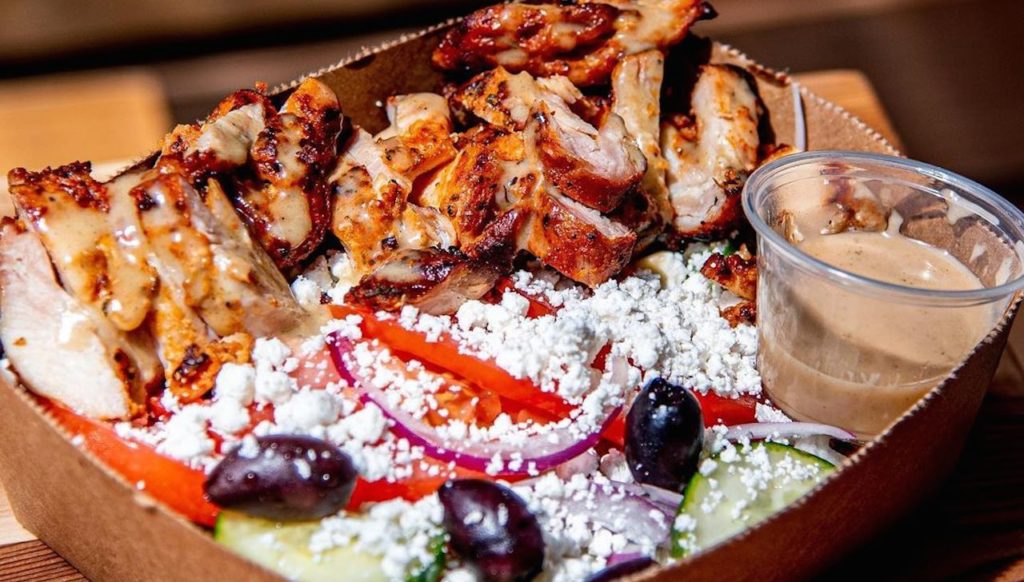 Known for their authentic yet modern take on traditional Greek fare, Ossington hot spot Mamakas Taverna — considered to be one of Toronto’ s best — recently opened a pop-up in Yorkville.  Located at 105 Scollard St., Souvla by Mamakas will be open for the winter and spring season, serving up an array of Greek BBQ dishes, delicious grab-and-go items and delicious sweets. Following the pop-up  (and after renovations) a new concept from Mamakas Food Group will enter the space, which according to owner Thanos Tripi, will follow Mamakas’ “current portfolio of Aegean concepts.”

Other menu items include full meals like the kebab plate which is a grilled lamb and beef kabob served with Greek salad, rice pilaf and potatoes ($24) and feta fries ($7.50). Popular desserts like loukoumades ($6) a sweet honey soaked donut topped with cinnamon sugar and bougatsa ($9) a handmade phyllo pie filled with a sweet custard are also on offer.

There’s also three homemade dips that can be enjoyed at home ($12.50 each) including tzatziki, kopanisti and melitzanosalata which is made from smoked eggplant, parsley, lemon, walnuts and honey.

“The space has so much potential with a beautiful secret garden we plan to activate,” said Tripi.

This is not the restaurant’s first foray into the pop-up market. Back in the summer of 2020, Mamaka’s began a summer street-food pop-up while the city was under provincial lockdowns due to the pandemic. It was such a success, it has continued in different locations ever since.

Souvla is open for pickup or delivery 11 a.m. until 8 p.m Monday to Saturday for the winter and spring season.