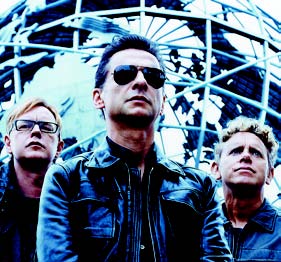 HONED OVER THE last decade, Xavier Rudd coaxes more sound out of an acoustic slide guitar than one would think possible. His pursuit of the ultimate fuzzy, thick wall of sound reaches its apex on Rudd’s latest recording, Darker Shades of Blue. He checks into town, in support of the release, for two nights this month.

“It is a heavier album for sure,” says Rudd, over the phone from Houston, Texas, where he is rehearsing before his tour begins. “Over time, I’ve developed this tone, this big sound out of acoustic guitars, and this album is the pinnacle of that. It is one guitar line right through, no bass, no extra guitars, just one thick tone and Dave Tolley drumming.”

A native of Jan Juc, Australia (yes, it’s as small as it sounds), Rudd grew up surfing the legendary break at Bell’s Beach in Torquay, Australia. Teaching himself to play an eclectic array of wooden instruments, Rudd developed his own style. He used music as his own personal therapy tool, in the beginning. And he still does, but now millions hang on every note.

“I’m self-taught as a player. As a kid, I always just fiddled on things,” says Rudd. “I always liked the idea of interpreting an instrument my own way. Even if I was playing it wrong, that’s what comes through me, so I just play it.”

After three independent releases and five studio albums, Rudd has a global following for his unique amalgam of blues, roots and reggae as well as his one-man band style of stage show that sees him positioned behind an array of guitars, didgeridoos, stomp boxes and percussion instruments.

“Ya, I just added bits and pieces, you know, to create a mood based on the story of the song, and I’d selected instruments for that to thicken my sound,” says Rudd. “I always played on my own. It was always like a secret, my own little thing I would do to release emotion.”

For his latest release, Rudd worked with one additional person: drummer Dave Tolley, from Kitchener, Ont. On this current tour and for his next album, Rudd is adding two new musicians.

“It is going to be supergroovy, really cool. It is brand new, and I’m really excited about it.” Xavier Rudd plays at the Queen Elizabeth Theatre at Exhibition Place on July 22 and 23.

Born in Alberta, Jolene Higgins, who records under the moniker Little Miss Higgins, was raised in Independence, Kansas, surrounded by the blues. But that didn’t impact her nearly as much as a band we all know and love: Dr. Teeth and the Electric Mayhem.

“There was a lot of great music that definitely influenced me in those shows,” says Higgins, on the phone from beautiful downtown Kenora, Ont., following a sold-out show. “The Muppet Show had a great band; the female guitar player … wicked.”

It wasn’t until Higgins was back in Canada that she started playing guitar and discovered the blues greats of a bygone era, such as Memphis Minnie and Big Bill Broonzy, by investigating the influences of her own favourite artists: Joni Mitchell, Bob Dylan and Joan Baez. And Little Miss Higgins was born.

One of Canada’s unique talents, Higgins has flown under the radar in Eastern Canada from her homestead in the 400-strong town of Nokomis, Sask., but is beginning to receive the attention she deserves with a Juno nomination and a Western Canadian Music Award for Best Blues Album for her 2008 release Junction City.

DEPECHE MODE WAS one of the first bands to do away with those pesky electric guitars. In their place, synthesizers ruled the new wave roost, along with bleached hair and plenty of black and white. Although we’ve long since buried our bleach and moved on, the band has survived, somehow. Not only that, people “Just Can’t Get Enough.” Ahem. They play Molson Amphitheatre July 24.