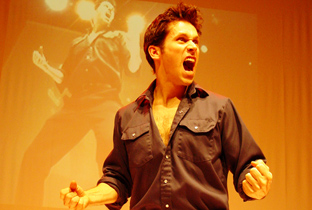 The multitalented, multilingual Rick Miller reprises his multimedia hit Bigger Than Jesus this week at Factory Theatre. It is the second play in a trilogy of his one-man shows: last month he did MacHomer, and later this month he will be closing with Hardsell. Trained as an architect, this singer-actor-writer can draw a crowd and then some. We went to Factory Theatre and asked this Lennon-quoting rabble-rouser who he thinks he is.

With Bigger Than Jesus, are you proselytizing?
I guess. Part of the reason I write plays is I like to explore ideas, like, what is my worldview? How does it deal with religion? And, in Hardsell, How does it deal with marketing? I want people of different backgrounds to come together and maybe put aside some prejudices. And yes, maybe [I want to] proselytize that religion is far more potent in the question than in the answer.

You’ve performed Bigger Than Jesus for years and have encountered little in the way of protest other than at a recent show in Australia. Have you ever had anyone interrupt a performance?
We’ve had people leave a performance, usually near the beginning. Calling [holy scriptures] beautiful, inspiring “literature” and calling these things “stories” is pissing a lot of people off. I wish they would stay to the end because it does get more and more reverent in a surprising way — and then a lot of people are disappointed in that, and I don’t mind that either. That’s just the nature of a theatrical experience.

Mel Gibson’s The Passion of the Christ. Thumbs up or thumbs down?
[Laughs.] I saw it in the theatre. Interesting experience. It was like a snuff film. The most pornographically violent film I’ve ever seen. To me it was the worst of Catholicism. This doctrine of misery. What he was trying to convey with the film? “This is what you’ve done to our Lord, you sinful worms, you!” It was awful!

What is Hardsell all about?
It breaks down Rick Miller the brand and Rick Miller the person, in a way, for people to try and look at the truth of who you are and who you would like to be. And so many times, who we’d like to be is compromised by selling out or making choices we feel we have to make just for money.

If someone wants to market a Rick Miller action figure, would you go for that?
[Laughs.] If it were ironic I might. I think we do have some measure of control and choice in this world over what we buy, what we sell, what we advertise. Those things are natural to us; we are natural consumers. Capitalism has won, let’s face it. It’s just, what kind of capitalism is it? People need to reclaim the control they have over corporations, to say “I don’t want to buy from you. You need me to buy from you, but I don’t like what you do. I want you to do this.”

Is church theatre, and can theatre replace church for those who have stopped going?
A lot of times when people go theatre, it becomes, “What’s the $100 big ticket show we’re going to go to in Toronto for one night of the year?” That has its place; that’s entertainment. But to me, theatre is something a little bit more sacred. And even though theatre has been quite corporatized and is very marketing driven, it needs to survive. I do feel that for people who have abandoned the communion of religious ceremony, in a hyper-individualistic, inward-driven world, I think getting out to hear stories, to be transported, is a good thing.