One day of peace, love, music and food - Streets Of Toronto
Skip to content 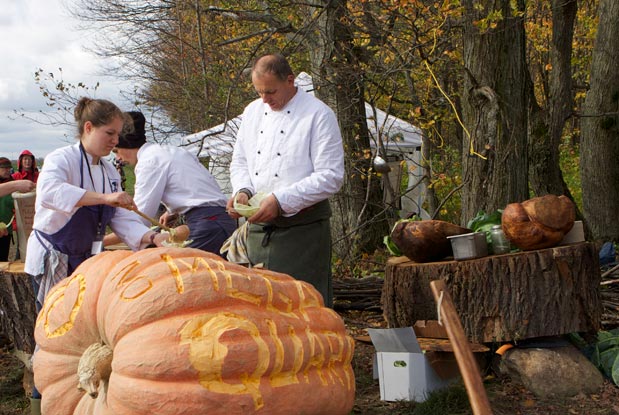 Nothing seemed to curb the hungry spirits of visitors to Foodstock on Sunday, as they braved spotty skies and fields of mud in a pay-what-you-can celebration of local produce, fresh water and culinary camaraderie.

Some 20,000 foodies and supporters attended the event, hosted on a defiant potato farm in Honeywood, Ontario, to sample a smorgasbord of local bounty prepared by an impressive roster of over 80 Canadian chefs.

Foodstock, presented by the Canadian Chefs’ Congress, was a bid to raise awareness for The Highland Companies’ proposed Melancthon mega-quarry, which would span an area a third the size of downtown Toronto and eviscerate the earth to a greater depth than Niagara Falls.

The controversial project plans to excavate 2,300 acres of agricultural land north of Orangeville in a bid to access the area’s rich limestone deposits. To facilitate mining, an estimated 600 million litres of water would have to be drained daily, posing a serious threat to the watershed of multiple rivers.

Michael Stadtländer, president of the Canadian Chefs’ Congress and champion of all things locavore, addressed the Foodstock crowd and called the event a “special day for the relationship between chefs and farmers.” Stadtländer’s celebrated restaurants, Eigensinn Farm and Haisai, are located near the proposed site of the mega-quarry.

Foodstock’s participating chefs — including many of Toronto’s finest — were rallied by Stadtländer’s culinary call to arms.

“It’s extremely important for us as chefs to preserve where we get our food from. Farmers are so passionate about the land, and we’re passionate about our ingredients,” said Rob Gentile, executive chef of King West’s Buca, who offered bison prosciutto with house-made pecorino fresco on chickpea panella.

Aaron Joseph Bear Robe, chef and owner of Queen Street’s Keriwa Cafe, apprenticed under Stadtländer. While dishing out fried green tomatoes with corn relish, Bear Robe stressed the importance of recognizing the breadth of impact that the mega-quarry would have on the surrounding area. “This doesn’t just affect food, but water. It affects future generations. If you take away water, you essentially have nothing,” he said.

Despite the looming threat of the quarry, visitors happily ate their way through a showcase of rustic gourmet food, scattering throughout the woods and spilling onto the peripheries of potato fields in layers and rubber boots.

All trappings of pretension were left at the gates as Foodstockers patiently weathered rain and long lines and held impromptu picnics on the damp forest floor. Music lovers swayed to performances by Sarah Harmer, Jim Cuddy and members of the Barenaked Ladies.

Some of Toronto’s most acclaimed chefs, including Anthony Walsh of Canoe, Jamie Kennedy of Jamie Kennedy Kitchens and Brad Long of Cafe Belong cooked for the cause.