On the Cover: Laurie Holden on life in Forest Hill, zombies, and trading horror for comedy - Streets Of Toronto
Skip to content 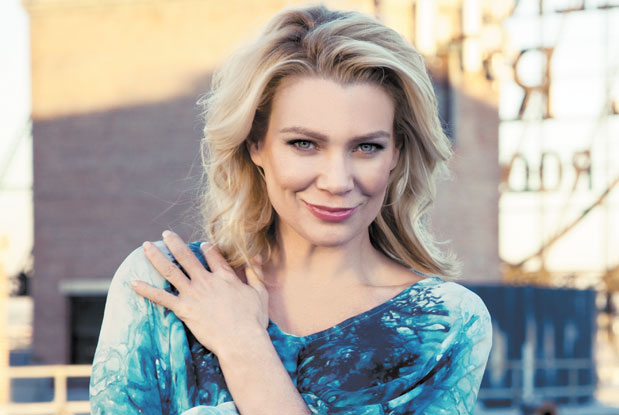 (The movie hits theatres this November.)

Holden plays the scheming wife of a doctor who concocts an evil plan to use Carrey and Daniels’ lovable, low-IQ characters (Lloyd Christmas and Harry Dunne, respectively) as scapegoats.

The Los Angeles–born, Toronto-bred actress says her switch from working in the dark land of TV horror — as a human survivor of a zombie apocalypse on The Walking Dead’s first three seasons — to laugh-out-loud comedy was a much-needed change of pace in her career.

“I was itching to do something different —something light and something fun,” says Holden.

“The Walking Dead was emotionally taxing and hard on the spirit, so I loved being able to let loose and go crazy with this cast.”

Not only was the shoot pure fun, Holden says, it was also a fast-tracked education in comic acting with Carrey and Daniels taking the lead.

“Jeff and Jim are truly brilliant — working with them and watching them was like a master class on everything comically absurd,” Holden says.

Understandably, one of the greatest challenges on the shoot, Holden says, was keeping a straight face.

For an actor who has undertaken many dramatic roles to date — she acted in the American drama The Majestic (also with Jim Carrey) and the critically acclaimed FX police drama The Shield — Holden says she feels fortunate to have landed in the world of comedy in a Farrelly brothers film.

“If you thought ‘Dumb and Dumber’ was funny, this takes it to the next level. ”

She’s always been an enormous fan of the directing duo who have become known for comedies involving a mix of gross-out scenes, toilet humour and sweet romance.

(There’s Something About Mary, Kingpin, Me Myself & Irene).

Holden was pleased to discover that working on their films is just as much fun as watching them.

The loose atmosphere created on set, she says, put everyone at ease and really brought out the funny in the actors.

“It was very improvisational and a lot of the filming was off the cuff,” Holden says. “It was the funniest [shoot]. If you thought Dumb and Dumber was funny, this takes it to the next level.”

Although Holden has been in the entertainment business since she was a child, it seems she’s come into her own more recently after years spent honing her acting skills.

With parents who were both actors themselves and a film director stepdad, Holden says it seemed obvious to everyone but her that she would follow in the family business.

Her first role came when she was hanging out on her stepfather Michael Anderson’s set for the sci-fi TV miniseries The Martian Chronicles (1980), and a child was needed to play Rock Hudson’s daughter.

Holden says she saw the parts she played when she was younger as ways to make pocket money in the summertime.

She played a lot of sports, went to school dances at Upper Canada College and had lunch with her friends in the Village.

Most importantly, she says, attending BSS gave her a strong foundation that has served her well in the fickle industry of show business.

“I remember at BSS it was cool to be smart and athletic,” she says. “We wore uniforms and didn’t wear a lot of makeup, and it was all about being your best self.”

When it came time to pursue a career, Holden surprised her family by announcing she wanted to be a banker and enrolled at McGill University in economics and political science.

Holden explains her brief flirtation with the banking life was a rebellion against parental expectations. She eventually realized she wasn’t staying true to herself.

“I was in an artistic family, so becoming an actor was kind of expected. Since my family wanted me to do it, I rebelled against it,” she says. “Once they let go of that, I found my way back. I realized I, too, was artistic.”

After deciding she’d rather tell stories than determine lending criteria, Holden left Montreal for California where she earned a degree in theatre and film at UCLA.

In her early days as an actor in Los Angeles, Holden joined a theatre workshop run by acting coach Larry Moss (his name is often mentioned in Academy Award–winning speeches).

At Moss’s studio in Santa Monica, Holden and a group of actors would regularly put on plays and one acts and try out their own material.

“For me, it really began with Larry Moss. [His workshop] is what gave me the love for what I do,” Holden says.

Holden also feels fortunate to have had family members in the industry before her, since they’ve been able to help guide her.

“I tell them the most important thing is to get an education — to educate yourself in history, theatre and science — because you’ll draw on all of that in your work all the time.”

Holden says she finds balance in her life by volunteering for causes she’s passionate about, like working with the organization Operation Underground Railroad, to free women and children from being trafficked.

Although Holden’s roots in Los Angeles continue to be strengthened by the constant work she’s getting there (she’s currently guest starring on TNT’s police procedural series Major Crimes), she visits Toronto regularly.

She loves coming to the city to dine at such hot spots as Opus in the Annex, Agra on King Street West and Turf Lounge on Bay.

But the main reason she visits is to see family and reconnect with old BSS friends.

More simply put, she loves visiting here because it’s home. “And — you know — home is where the heart is,” she says.