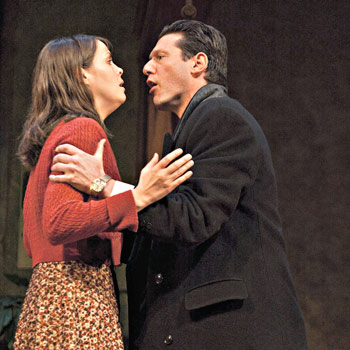 I THINK IT was the Greek philosopher Heraclitus who famously wrote that “One cannot step into the same river twice.” It’s a profound thought, since moving rivers are always changing and so are our ages, tastes, experiences. My favourite example of this is how, as a teenager in the late 1950s, I read J. D. Salinger’s Catcher in the Rye and wept through every page: this poor, misunderstood, confused kid who is so much like me! Decades later, I read the book aloud every night to my then-teenaged son Judah, and we both howled with laughter from the first word to the last, recognizing Salinger’s brilliant mockery of classic teenaged angst and egotism. Rivers change, and so do we.

These thoughts flooded me as I sat through Soulpepper’s production of the “classic” Jewish-American, Depressionera play by Clifford Odets Awake and Sing.

I have seen the play several times, and I loved it, finding it moving, poetic, profound. In the (now-embarrassing) tradition of my rather different responses to Salinger’s novel at two points in my life, I was often deeply disappointed with the play on this occasion.

I have come to the conclusion that the play is deeply flawed (but still occasionally moving and well written), but even more, the production at Soulpepper (where it runs until July 31) is far from the usual level we have come to expect from some of the country’s finest performers.

Odets’ play seems dreadfully dated now, yet what could be more “up-to-date” than a struggling family arguing over finances? It just doesn’t come to life in Soulpepper’s production.

Yes, there are many still-funny lines. And the audience roars with laughter, even today, when the ineffectual father weeps in a Chekhovian fashion: “When I started losing my hair, I felt that I was destined to be a failure in life!”

In this production, the usually reliable Miles Potter, one of Canada’s finest directors, gets so many things wrong: the Bronx and Yiddish-Russian accents, the heartbreak, the poignancy. The usually superior Nancy Palk is not believable nor moving, and William Webster’s grandfather Jacob is often mortifying. Only Ari Cohen’s brilliant, angry Moe, who lost a leg in the Great War and never stops referring to it, rises to the occasion and creates a believable, unforgettable character.

A play with a view

Also running, from June 27 until July 12, one of Canada’s most interesting and gifted playwrights, Morris Panych (of The Overcoat and The Dishwashers fame), has his fine comedy Vigil performed at the Ward’s Island Playhouse. A perfect reason for heading off to our beautiful Toronto Islands. Go to www.longearedplays.com for more information.