Oh, those crazy kids - Streets Of Toronto
Skip to content 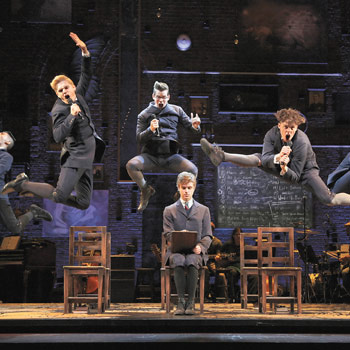 THE SUSPENSION OF disbelief is a must to enjoy live theatre, and never more than in a musical where actors are often bursting into song. With Spring Awakening, the Tony Award–winning musical now playing at the Canon Theatre until April 19, it’s not only “disbelief” that must be suspended — German teenagers dressed in the rough 1890s clothes whip out microphones to sing mournful ballads and filthy lyrics — but a sense of historical context is essential.

The original play was written by Frank Wedekind (1864–1918), one of the most daring artists of his era.

He spent nearly a year in jail for publishing satirical poetry. His plays were “shocking” in a way that seems unbelievable in today’s sex-drenched world of film, TV and Internet.

The problem — only sometimes solved by Steven Sater’s intelligent, if occasionally shallow, book and Duncan Sheik’s beautiful pop songs — is in capturing a provincial, mid- European town where a girl could cry out, “But I can’t be pregnant! I’m not even married!”

It’s a dilemma, and while I preferred the performances and sheer physical beauty of the two main characters when I saw the musical on Broadway in 2007, it still often works.

We must remember that in the 1890s teenage pregnancy destroyed families, as did failing in school.

Gay sex was illegal (Oscar Wilde went to prison for homosexuality while Wedekind’s play was still banned.). Spring Awakening at its best is deeply moving and affecting, even in this flawed production.

When a group of pubescent girls sing plaintively about how they still believe in the stork and know nothing of their bodies and sexuality, it can break your heart.

Today, best-selling books and documentaries mock religious belief for the amusement of others, yet here we see a group of girls stunned to hear of a boy who “doesn’t believe in anything, in God or heaven or anything!”

I like Spring Awakening a lot (the crazed dancing, with arms and legs flinging about wildly, captures the frenzy of teenaged raging hormones better than anything I’ve ever seen).

If you love the ballads and rock ’n’ roll of the last few decades, and keep in mind how truly shocking Wedekind’s original play was more than a century ago when it was first written, I sense that you will enjoy it, too.