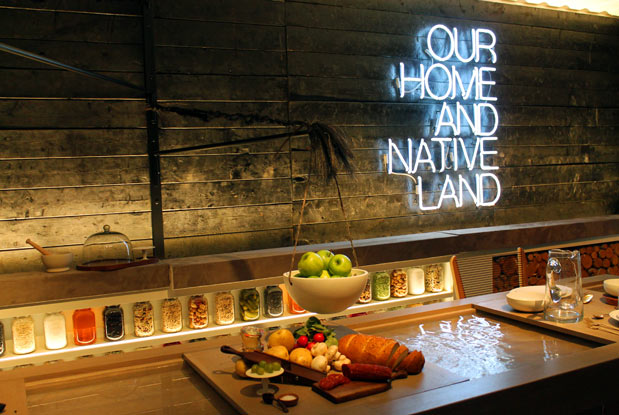 We had a chance to check out the Interior Design Show and were overwhelmed by the creativity and innovation we encountered. Housed in the Metro Toronto Convention Centre, the mammoth space was host to seemingly endless presentations, ranging from Contact Voyaging Co. canoe paddles to Tahir Mahmood’s candle holder/dinner bell to complete installations from Miehe (which included a glassed-in room, an acted-out scene and, oh, popcorn for those watching). Below, a few of our favourites from the show.

Now Magazine’s cover kids — Stanley Sun and Ashley Rumsey — of Toronto-based Mason Studio morphed half of a shipping container into a room that questions the way a space can be lived in. The installation (pictured above) was built around a trough-slash-table that featured various vignettes, but also acted as a route for water to traverse, running from a faucet into a garden.

The entrance installation from this architecture firm featured a felt strip curtain of sorts suspended from the ceiling. Digital images were projected onto the piece, drawing viewers into the main exhibition space. Each year, various designers whip up a chair to be auctioned off to raise money for the show's Cherish fundraiser. This year’s designers included Donna Karan, Debbie Travis and David Dixon. We enjoyed Bruce Mau’s diorama of the great outdoors, complete with waterfalls, a tiny cabin and some deer. Lissoni was the show’s international guest of honour, and he has worked with countless well-known brands such as Kartell, Alessi, and Cassina. Currently working on a number of projects, including a design hotel in Amsterdam, much of Lissoni’s exhibition space was done using a palette of creams, taupes and off-whites. We loved how he transformed a bookshelf into an object of quiet beauty by showcasing the pages of books, rather than their spines. The fan-like chairs from up-and-comers Eiri Ota and Irene Gardpoit Chan were absolutely stunning, appearing to have been plucked from some fanciful land. We loved the pale mint one, envisioning it as a subtle highlight of colour in an all-white room. These candy-coloured vases mimicking the shape of a pylon were a playful take on the construction zone staple and would be an amusing addition to any dinner table. Built from wood, Comber’s spheres spilled light from within, showcasing the energy of the wood and simultaneously managing to look both calm and chaotic. We were charmed by Leslie Sinclaire’s take on the tiffin lunch kit. Using thin-walled ceramics for the bowls and cork for the lid, the design student (at Emily Carr University) has created a lunch box that is both practical and stylish. Hidden in a semi-enclosed cube, this installation from the landscape design company brought the outdoors in. The clean yet inviting space exemplified the company’s work, featuring moss-covered walls, simple benches and was dotted with trees.