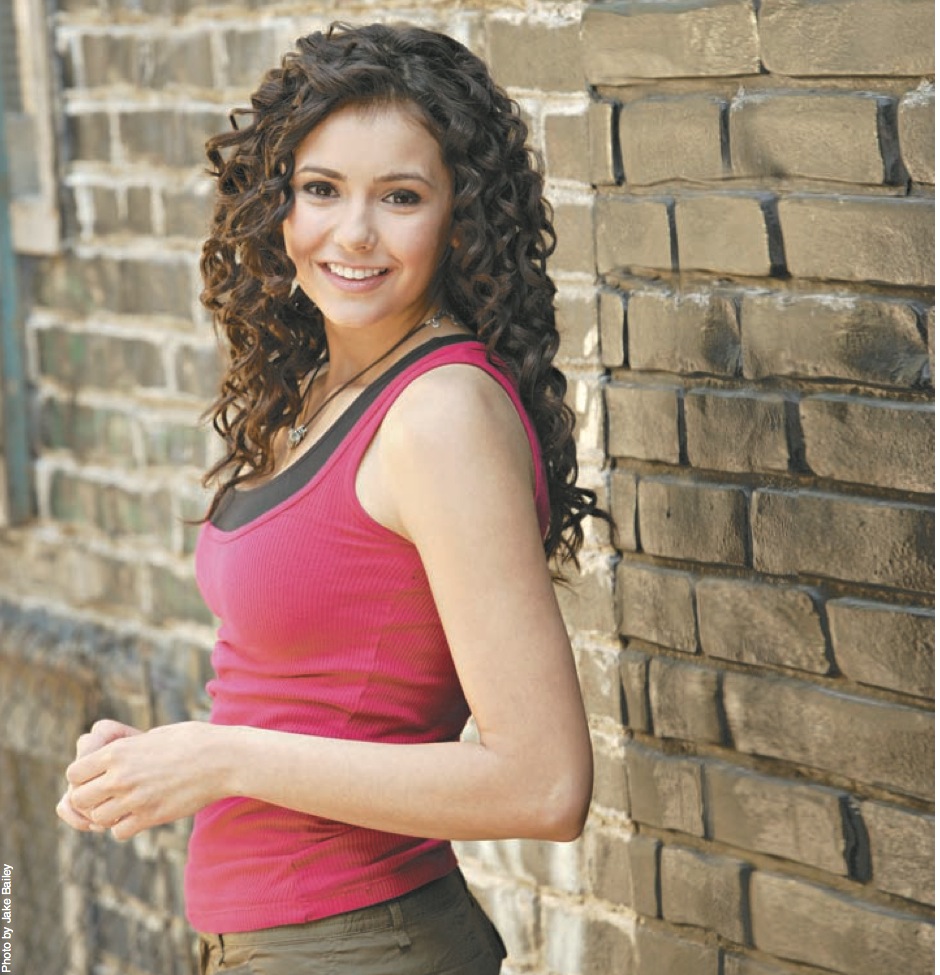 NINA DOBREV’S FIRST words from her cellphone, which she’s using to call from Atlanta, Ga., are a clear indicator of just how quickly this young actor’s star is rising.

“I just got this car, and I’m really excited about it,” she says, as she drives the new Audi to work. “It’s my first car,” she says with pride. “I’ve never had a car before. I’ve always driven my mom’s Toyota Corolla.”

But for Nina Dobrev, there’s a lot more than a new car to be excited about.

The 20-year-old brunette is driving her pride and joy (“It’s triple black — black in every way except there’s a silver trim”) to the set of The Vampire Diaries, a teen TV drama set to premiere this fall. On top of that, September will mark the world premiere of her latest film, Chloe, at the Toronto International Film Festival. The film, directed by Atom Egoyan, stars veteran actors Liam Neeson, and Julianne Moore as well as up- and-comer Amanda Seyfried.

Chloe, a remake of a French film called Nathalie, is about a successful doctor (Moore) who suspects her husband (Neeson) is cheating on her. She hires an escort (Seyfried) in an effort to procure information about her husband. Nobrev plays Anna, the girlfriend of Moore’s character’s friend, Michael. The actress said she couldn’t help being a little star- struck working with such heavy weights as Neeson.

“C’mon,” she says, “Schindler’s List? Unbelievable. I never thought I would work with him.” Neeson’s name made headlines during filming when his wife, actress Natasha Richardson, died in hospital after sustaining a head injury while taking a ski lesson in Quebec this past March.

“Unfortunately, because of the tragedy that happened with his wife, while we were shooting, all the scenes were cut out that we were supposed to do,” Dobrev says. “But I got to meet him, and it was a huge pleasure and he was so sweet and so wonderful to be around, and Julianne Moore was just the same.”

Nobrev only has kind words for the star of the film, Amanda Seyfried. “Amanda and I are friends now, but she’s such an incredible actress, and she’s someone I was star-struck about, too,” she says. “I mean, c’mon, Mean Girls? Mamma Mia!? She was unreal.”

Though Dobrev is in awe of her colleagues’ accomplishments and talent, this young starlet isn’t far from joining their ranks.

Just three years ago, Dobrev was both a high school student and an athlete, competing heavily in rhythmic and aesthetic gymnastics (“It’s like synchronized swimming, only with gymnastics”) with the Canadian Aesthetic Gymnastics team at a Bayview club near Leslie Street and York Mills Road.

“I loved the competitive aspects, and I loved the physical and social aspects of it,” Dobrev says. “A lot of my friends were doing it, and it was fun, it was dancing, it was performing, but it was still a challenge. The training was really intense — anywhere from three to four hours, six days a week.”

Combined with being a theatre student at Wexford Collegiate School for the Arts, performing in front of audiences was a regular part of life for the high school student. When acting coach Dean Armstrong of Toronto’s Armstrong Acting Studio, came to her school to teach a workshop on on-camera studies, she was hooked. Dobrev signed up for private lessons with the acting coach. Soon after, she was ready to embark on her career, with agents and several auditions lined up.

“I auditioned for three things within a week and ended up getting all three things,” Dobrev says.

The jobs were nothing to scoff at: a role as Mia Jones in the Canadian television series Degrassi: The Next Generation and two smaller parts. The first, in Jeremy Podeswa’s Fugitive Pieces, based on the Anne Michaels’ novel, and another part in Sarah Polley’s award-winning directorial debut, Away from Her, alongside Gordon Pinsent and Julie Christie.

“I shot them in February, March and April of that same year,” Dobrev recalls. “I was still in high school. It was kind of crazy, the first year while I was doing it. Degrassi started airing and stuff, and things got kind of different — I was on TV and my friends would poke fun at me about it.”

Dobrev had to hire a tutor so that she’d be able to graduate with a high school diploma.

“I basically went back just for prom at the end of the year,” Dobrev remembers. “And it was really fun, but at the same time it felt kind of weird because I felt like I’d missed out on a lot of inside jokes. It was a little odd but I gained a lot of experience that I otherwise wouldn’t have.”

Dobrev has appeared in several other television projects since then, including Eleventh Hour and The Border. Then, this past January, she gave up her Toronto apartment to make the big move to Los Angeles, just in time for pilot season in TV land, where she landed a job almost immediately as the lead in The Vampire Diaries.

If the enormous success of films such as Twilight and the HBO series True Blood is any indication, the newest in vampire entertainment should also be a success. Dobrev plays Elena, who, after being involved in a car accident that kills both of her parents, loses interest in the popular crowd of which she was once queen. Soon, she meets the dark and brooding Stefan, who, of course, turns out to be a vampire. When his jealous brother gets thrown into the mix, things get really complicated.

Despite being too busy to visit home quite yet, Dobrev has big plans to make the rounds to her favourite places in Toronto this month when she’ll hopefully have time to come to the film festival.

“Oh my God!I have so many favourite things to do,” she says. “There’s one place right around the corner from my old house, called Johnny’s Hamburger. It’s a hole in the wall; they haven’t renovated since probably the ’40s; and the burgers are massively huge and really cheap and really yummy.”

Dobrev says she also can’t come to Toronto without visiting the Drake Hotel and Café Crepe.

“I have a massive sweet tooth for a banana, Nutella, coconut crepe,” she says.

It’s OK, though, because with her brand new car, the family and friends will come to her.

“My parents are so excited,” she says. “And my brother was, like, ‘Whoa! I wanna come visit and drive your car,’ so he’s going to come, and he’s going to check it out.”