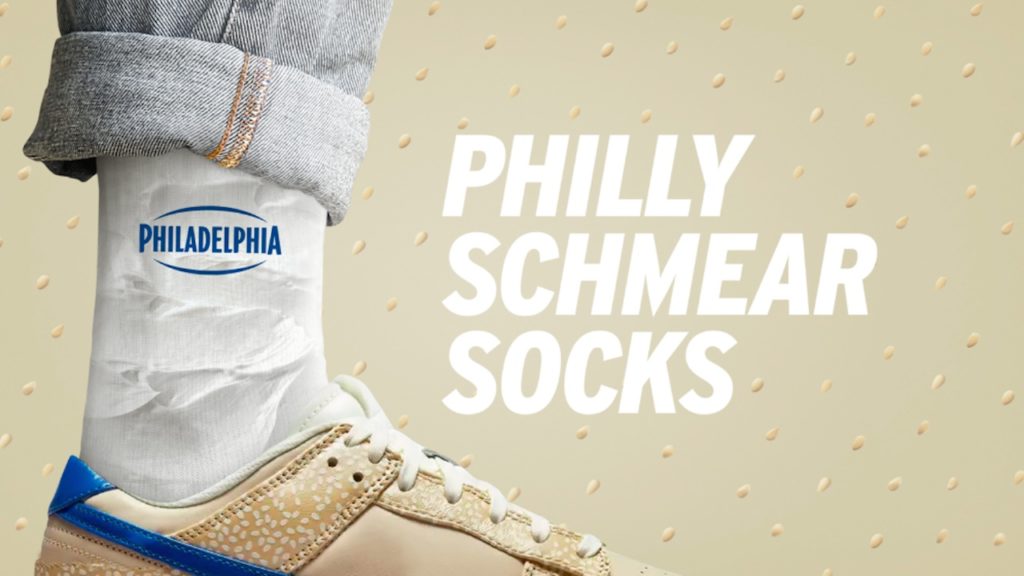 Update: Is a bagel really anything without smooth, creamy Philly? According to the Kraft Heinz Canada brand, that answer is no.

To compliment Nike’s new Montreal bagel inspired kicks which just dropped on Jan. 17,  (and have already sold out), Philadelphia Cream Cheese will soon be launching Philly Schmear Socks, available in three “flavours” including Original, Strawberry and Chive and Onion.

Adorned with the Philadelphia  logo, the socks look like they’ve been covered in schmears of the brand’s delicious cream cheese and will retail for $14.99.


Nike has long been at the forefront of the footwear scene ever since launching the iconic “Moon Shoe” back in 1972. And now, the multi-million dollar athletic brand has added what some consider to be the crown jewel of Montreal cuisine to it’s list of iconic designs.

Set for release on January 17, the Dunk Low Montreal Bagel Sneaker is bringing “fresh-baked style to the streets” according to the description on Nike’s website.

“You know the saying: The sweeter the bagel, the sweeter the Dunk,” the description goes on to say. The shoe features  “carb-lover colors plus a pinch of Montreal blue.” The kicks are adorned with fun sesame seed graphics that’s sprinkled atop the overlay panels, while a gum-coloured sole completes the design.


This isn’t the first time Nike has given some love to a Canadian city. Back in 2015, the brand came out with a pair of Toronto-inspired sneakers called ‘The  6.” Designed by Canadian footwear designer Erin Cochrane, the Nike Air Max 1 featured the CN Tower on the soles, sock liners inspired by the Aurora Borealis  and “The 6” inscribed on the inside of the tongues.

The Dunk Low Montreal Bagel Sneaker retails for $120 US and is set for release on January 17.