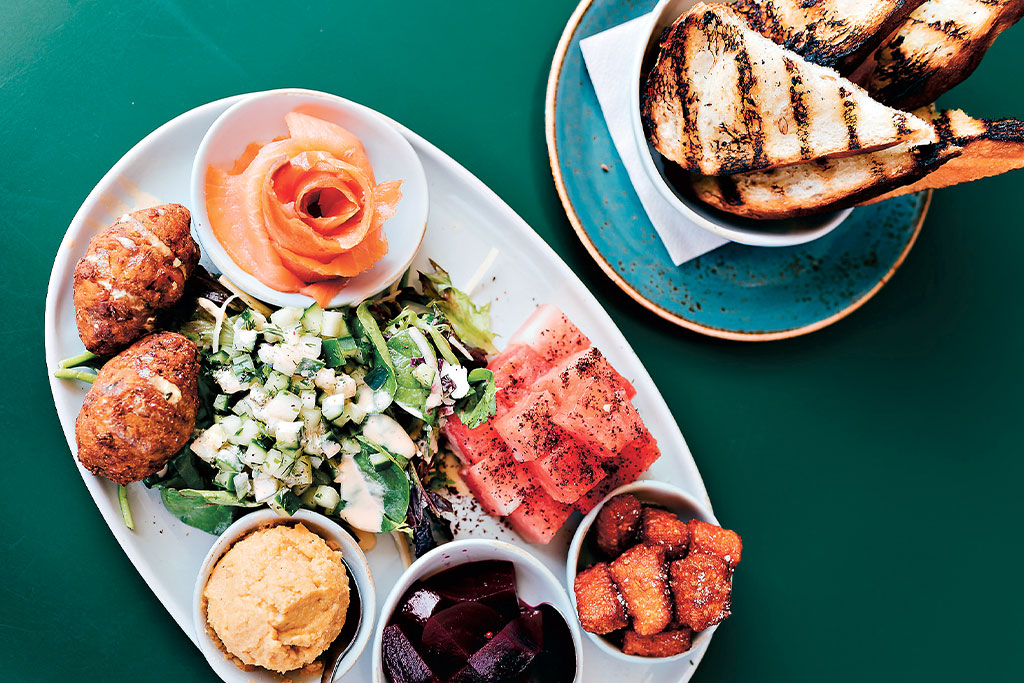 Smokeshow BBQ and Brew is bringing Memphis-style BBQ and live music to midtown. The new joint at Mount Pleasant and Eglinton promises weekend rock and roll acts paired with inventive gastropub-meets-smokehouse fare like flatbread pizza with BBQ pork. In addition to a full-size in-house smoker, the restaurant uses a hand-smoker to smoke dishes like onion rings and jalapeno poppers tableside for a true “smokeshow.”

Mornings are a little brighter at Yonge and Eglinton with the opening of MIA Brunch Bar. This cheerful new space is dishing up classic brunch staples, like chicken and waffles and savoury omelettes, along with early-in-the-day cocktails like mimosas and Aperol Spritzes that are sure to take the edge off of February’s grey winter mornings.

Calgary-based restaurant Anejo has made its eastern Canada debut on King West, taking over the big lower-level space previously occupied by Bier Markt. The new spot promises a Mexican-influenced menu and includes snackable eats that are sure to be popular with the post-work crowd. The interior features moody decor with pops of colour for a King West–meets-Mexico vibe.

Paris Paris’ Jonathan Poon has teamed up with Dundas West favourite Extra Burger for a casual new Parkdale wine-and-burger concept: Nice Nice. Taking over the former Superpoint Express location, the new space is divided into a takeaway burger counter and a tiny wine bar (customers can grab their burgers to go or walk through a beaded curtain-fringed doorway leading to the sit-down bar area). There’s a small menu of snacks from Paris Paris, but it’s really all about those classic smash burgers and crinkle fries. Wines are a mix of affordable glasses and some special, splurge-worthy bottles.

The Green Wood has opened a beautiful new location on King West, just east of Brant Street. Known for its homey, sustainably sourced fare, the Green Wood’s new location includes a dine-in restaurant plus grab-and-go items. At both locations, the restaurant is expanding its offerings beyond midday meals to include a dinner menu of more hearty but wholesome fare, as well as cocktails.

Roncesvalles’s Barque Butcher Bar has been revamped as Bar*Q, a new sports bar specializing in burgers and beer. For non-brew hounds, Bar*Q is offering a “choose your own old fashioned” cocktail, which allows diners to customize their old fashioned by choosing from a selection of mezcals or bourbons, sweeteners and bitters.

Yorkville’s much-loved back-alley bistro Chabrol is moving into larger digs this spring. The charming French restaurant is set to take over a heritage building next to Bar Reyna in March. The new space promises a larger kitchen, which will allow the restaurant to expand its current menu and add a raw bar.

Chef Tomer Markovitz of Geary Avenue’s acclaimed Middle Eastern restaurant Parallel is opening a new spot in Hillcrest Village this spring. Dalpak will feature Israeli street food and Jaffa-style bites and, unlike Parallel, the menu here will be completely plant based.

Sad to see you go

Kensington’s gentrification issues continue with the loss of two long-running favourites: HIBISCUS CAFÉ and BIG FAT BURRITO. After 12 years in business, beloved vegan spot Hibiscus Café shut its doors abruptly in late January. Big Fat Burrito will soon follow, with the 15-year-old Tex-Mex institution set to roll up its last burritos at the end of February.