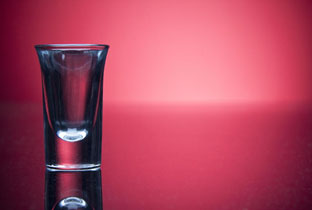 A groundbreaking new shot glass known as the Can-Pour looks exactly like a standard shot glass. A drink poured with it tastes exactly the same as any other drink. It feels the same and works in the same way. But it could save Canadian bars and restaurants thousands of dollars per year.

So what’s “groundbreaking” about the Can-Pour? Simply this: it actually holds a Canadian fluid ounce. Just about every other shot glass in Canada holds an American fluid ounce, which is approximately 30 mL. A Canadian fluid ounce is around 28 mL. That means most drinks have been over-poured across the country this whole time (well, at least for establishments that don’t purposely under-pour).

A difference of 2 mL may seem miniscule, but Can-Pour co-developer Kyle Tweter says the difference over time is huge. A 40-ounce bottle of liquor in Canada will only yield 38 American fluid ounces, which means the sale of two drinks per bottle is lost. And then there’s the issue of taxes, which are being paid for shots that aren’t even poured. An establishment that spends $20,000 per month on liquor could expect to save $16,800 per year with the Can-Pour, Tweter says.

The inconsistency was discovered a few years ago when Tweter and some co-workers were trying to account for lost inventory at their Vancouver restaurant. “The instinct is that it’s going to theft or spillage,” Tweter says – but that instinct was wrong.

After hiring an independent inventory company and still coming up with unaccountable losses, the golden moment came when Tweter and his co-workers decided to weigh a shot of liquor, which, of course, weighed too much. “We were shocked.”

Tweter searched for Canadian-sized shot glasses but couldn’t find any outside of Europe. So he and his partner Dan Wilson decided to make their own: the Can-Pour. The physical differences of the glass are undetectable to the eye, but the key change is a slight thickening of the walls, which makes it hold 2 mL less (and also, incidentally, makes the glass stronger).

Tweter says it’s probably Canada’s proximity to the U.S. that led to an unwitting, nearly universal adoption of American-sized shot glasses. Since the Can-Pour was rolled out in B.C. a few months ago, restaurants and bars have apparently reported dramatic improvements in inventory. The shot glass has just became available nationwide at major distributors like Sysco and GFS Restaurant Supply.

And while 2 mL less per drink could mean tighter inventory, we’re still trying to figure out what this means for our yearly collective partying output.