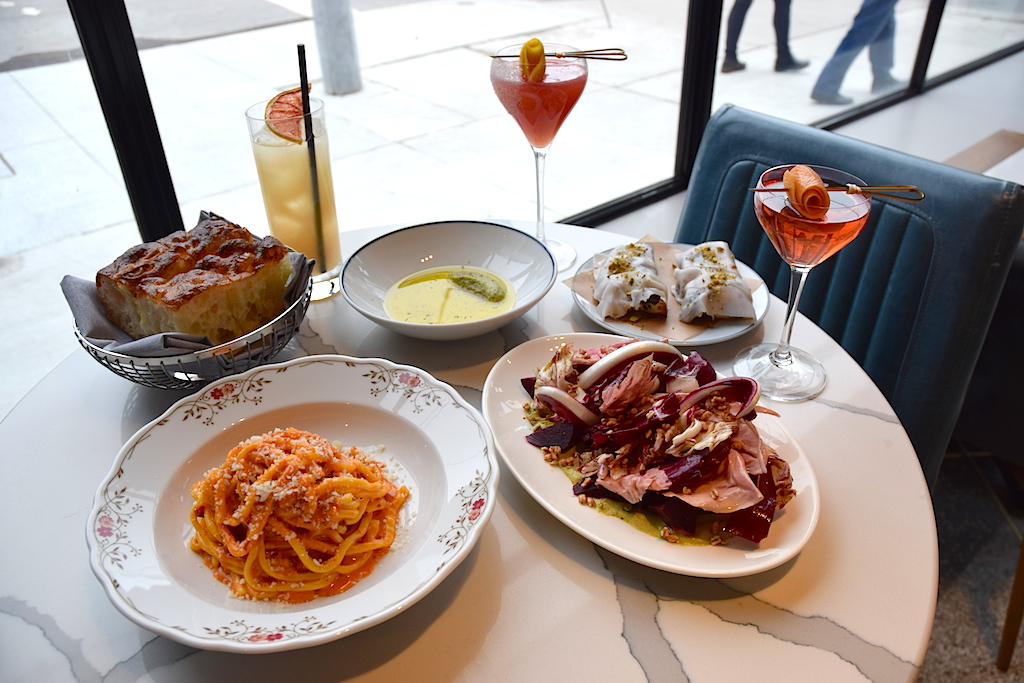 Sophie’s Dine-In and Takeout brings a casual lunch and dinner option to Eglinton. The restaurant’s crowd-pleasing menu runs the gamut from sandwiches and burgers to pizza and souvlakis. Sophie’s also has a lengthy vegetarian menu, which includes traditional Persian dishes.

Holt Renfrew’s flagship restaurant has reopened with an ultra-modern look and a revamped menu developed in partnership with Chase Hospitality Group. The new Holts Café menu will focus on seasonal Canadian fare with a hint of European influence, plus updated takes on a few old school Holts Café dishes.

The team behind Dundas West’s hip “hidden” venue Mahjong Bar has launched a new restaurant and bar concept. Inspired by Wes Anderson’s films, Bar Mordecai‘s design is equally striking as that of its sister restaurant, which earned a win at the 2018 Restaurant and Bar Design Awards. The menu modernizes European hotel lobby bar staples like finger sandwiches, whereas the drinks menu focuses on low-intervention wine.

Wildly popular red sauce joint Sugo expands its carb empire with the opening of neighbouring restaurant, Conzo’s. The new spot sticks to a similar formula as Sugo, serving up wood-fired pizza and pasta dishes made with Famiglia Baldassarre noodles.

Rosedale has a new destination for seafood with the opening of Robot Boil House. Expect dishes like tom yum dungeness crab and baked mussels delivered by robotic serving tray. Details on how the robots operate is still scarce, so you’ll have to go and find out for yourself.

Gusto 501, the long-awaited addition to Janet Zuccarini’s Gusto 54 restaurant group, is now serving up contemporary Italian fare in Corktown. The multi-level space is divided into a lower floor café and trattoria, whereas the upper level is a cocktail and snack bar. Fans of Gusto 101 will recognize favourite menu items like the Cavolo Nero salad, but the new restaurant adds a range of new dishes plus an ambitious cocktail program.

We were all a little crushed when Rob Rossi and David Minicucci shut down L’Unità last December, but even at the time they were hinting that they had plans to open a new restaurant in the space. We don’t know much about Osteria Giulia yet, except it will serve Italian fare and is set to open in May, according to their Instagram profile.

Robin Goodfellow and Amanda Bradley (Alo) are set to open Vela at King and Portland this May. According to the restaurant’s Instagram, it promises “energetic drinks, earthy cuisine and live music.” The kitchen will reportedly be helmed by Jeffrey Lapointe (Piano Piano, Splendido).

One of the city’s favourite sushi spots, Taro’s Fish, is opening a new takeout location in Markham. While the North York location will continue serving a variety of Japanese prepared foods and snacks, the new Markham outpost will focus on quality takeout sushi.

Charming Yorkville bistro Chabrol will move into larger digs at 156 Cumberland Ave. this month. The new location, in a heritage building beside Bar Reyna, means a larger kitchen for the Chabrol team and an expanded menu for diners that will include a raw bar.