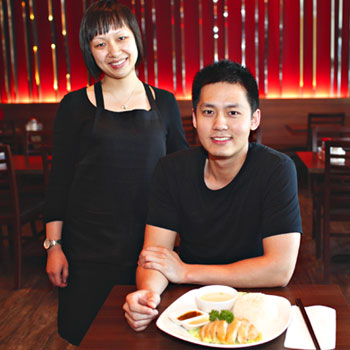 THE NEW PHOENIX restaurant entices patrons who like plenty of Chinese culinary choice at wallet-friendly prices — almost everything costs less than $10.

Offerings from other regions pervade the extensive menu, too— such as Mexican French fries, Japanese toast, Korean spicy rice, Thai minced pork fried rice and Spanish coffee. But the groups of friends and multi-generational families don’t seem to mind the mishmash.

Two vegetable spring rolls ($2.50), halved, require a bit more time in the deep fryer. The pastry wrapping the watery contents (carrot and sprouts, mostly) remains mushy inside. A dipping sauce of some kind — any kind — might have improved things.

Only a few toughish squid morsels (of many) detract from the pleasure of this dish, which also stirs together diced onion, garlic and red and green pepper in a black bean sauce that is blessedly light on the salt. Well-timed rice accompanies.

Plates come so fast (and in no particular order) that we barely have time to appreciate the modern, cavernous room.

Despite the language barrier and the fact that we were tucked away in a back corner away from other guests (and given forks instead of chopsticks — grr), service was pleasant and competent.