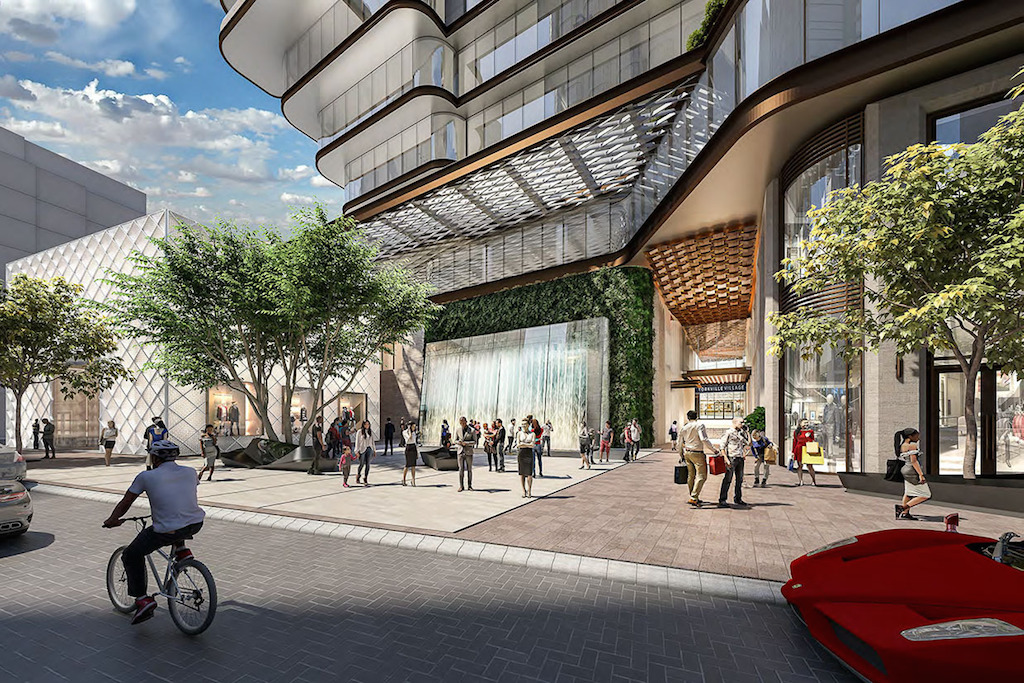 Plans have been revealed for a proposed tower and public square that could be a new west-end gateway to Yorkville.

The proposal for 33 Avenue Rd. is for a 29-storey mixed-use tower that will feature a “vertical forest” of greenery scaling along it and a “jewel box” retail store on the ground.

The development would also create a revamped York Square at Avenue Road and Yorkville Avenue with interconnecting passageways through the seven-storey podium of the building and a communal space with a waterfall feature and live performances.

The development has had a long history. First, developers Greybrook and Empire Communities owned the land and proposed a much smaller communal space. The two developers eventually dropped the project and it was picked up by First Capital, which owns at least 12 other properties in Yorkville and has previously revamped Hazelton Lanes into what is now Yorkville Village.

First Capital owned an adjacent property to the original site and included it in its plans for 33 Avenue Rd. to create a public realm up to 40 per cent bigger and with a 5.5-metre setback from the street.

“[First Capital] is taking what was a bad situation and made it modestly better,” local councillor Mike Layton said, referring to the increase in public space. “It’s a much more usable and functional community space.”

Layton owes this change largely to the efforts of the community, which banded together and created a public trust for the square to ensure it would meet their needs. Members of the retained Annex Bay Cottingham Residents Association (ABCRA) also retained the guidance of experts such as urban designer Ken Greenberg, who previously worked on the city’s Bentway project under the Gardiner Expressway and Grange Park near the Art Gallery of Ontario.

“The community was in the driver’s seat for [creating a usable square],” Layton said. “They’re happy with the outcome.”

Local resident and ABCRA co-president John Caliendo said that it has been at least a five-year process of working with the developer to achieve the results being proposed.

“That corner of Yorkville has become a bit desolate,” he said. “This [proposal] is going to open it up, make it more welcoming. It’s a great design.”

Caliendo said the public trust created has secured 20 years of funding to “animate” the square with activity such as a Thursday afternoon jazz trio or Friday evening TIFF screenings on one of the walls.

“The square will have a real presence to the street,” he said.

The proposal is now awaiting a city staff report in the next month and then will likely head to council in June.