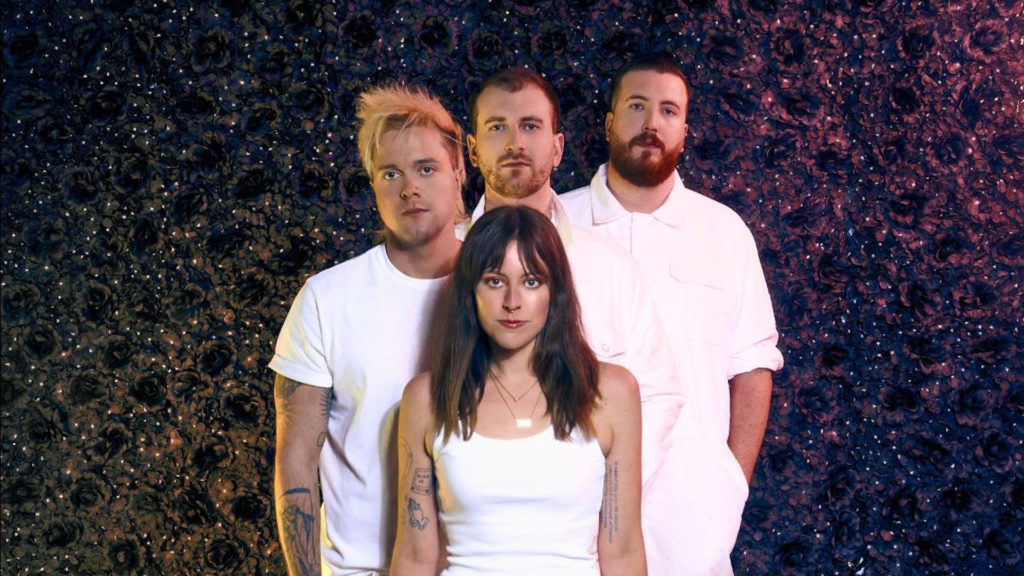 Common Deer is a four-piece Toronto band led by Sheila Hart on vocals with Adam Hart (guitar, synthesizer), Liam Farrell (percussion, samples), and Connor Farrell (bass). After a couple of highly regarding EPs, the band’s debut album, Maximalist, is officially out April 1.

The record tackles a range of raw and honest themes, from mental health, abuse, and addiction, to sexism and obsession, all with an undeniably raw vulnerability.

“Maximalist is a celebration of excess and a refusal to compromise, however misguided that might be,” Hart says.

It’s hard to feel like a musician when you can’t really record or perform. I’ve definitely had a couple of identity crises over the last two years! But I’ve tried to combat that feeling by continuing to write a lot, even if we aren’t recording, and staying inspired by listening to a lot of music. Incredible albums have come out over the pandemic, and that keeps me excited about what we’re doing.

Tell us about the new Common Deer project.

Maximalist is a lot of fun, despite the heavier lyrical themes. I was going through a lot of ups and downs with my relationships and mental illness throughout the writing process, and all of that ended up in the record. It’s definitely very personal. The music itself is pretty upbeat, and I love how that juxtaposes with the more serious lines. It’s very different than the previous releases, and we’re excited to see how our audience responds.

How would you describe the music of Common Deer?

The new album has a lot more synths, electric guitars, and sampled drums than our first two EPs, and its got a very 80s/new wave synth-pop sound. We were inspired by artists like CHVRCHES and Phantogram, who get a lot of their influence from earlier bands like New Order and the Cure that we also love.

We were almost done with the new album when COVID hit, and we were able to write and record one more track which was awesome. We definitely thought we’d be a lot more productive than we actually were, which I think is a common experience for a lot of musicians right now. Adam and I live in separate apartments but in the same house, so we worked on demos for the next release, whenever that might be. But, the four of us weren’t able to do a full rehearsal for basically two years, so that’s been tough – it’s been great to finally practice again.

What are you hoping people take from the new Common Deer album?

Lyrically, we’ve had a really positive response so far, and we hope the rest of the album resonates like the first two singles have and that people find the lyrical themes relatable.

I grew up taking classical piano and vocal lessons and did concert and jazz choirs in high school, and a few musical theatre productions. When I went to university, I had my sights set on writing and didn’t think I would ever go back to music in a serious way. Then, an opportunity opened up with Common Deer — Adam, Liam and our former member Graham had already been playing together for a couple of years with a different frontperson, and I joined after he left; Connor joined shortly after that, and we’ve been pursuing music as a career ever since.

Songwriting is such a huge part of my life and my identity, and that drives me even when I’m not feeling particularly inspired. It’s important for my mental health as well; a lot of lyrics don’t end up getting used, but writing them can help in the moment when I’m struggling.

In Toronto, the Horseshoe or Lee’s. Great sound, great spaces, and they’re just legendary venues – they haven’t lost their novelty, for me. Also, Amigos Cantina in Saskatoon. We’ve played there a couple of times, and they have the best food and soundtrack.