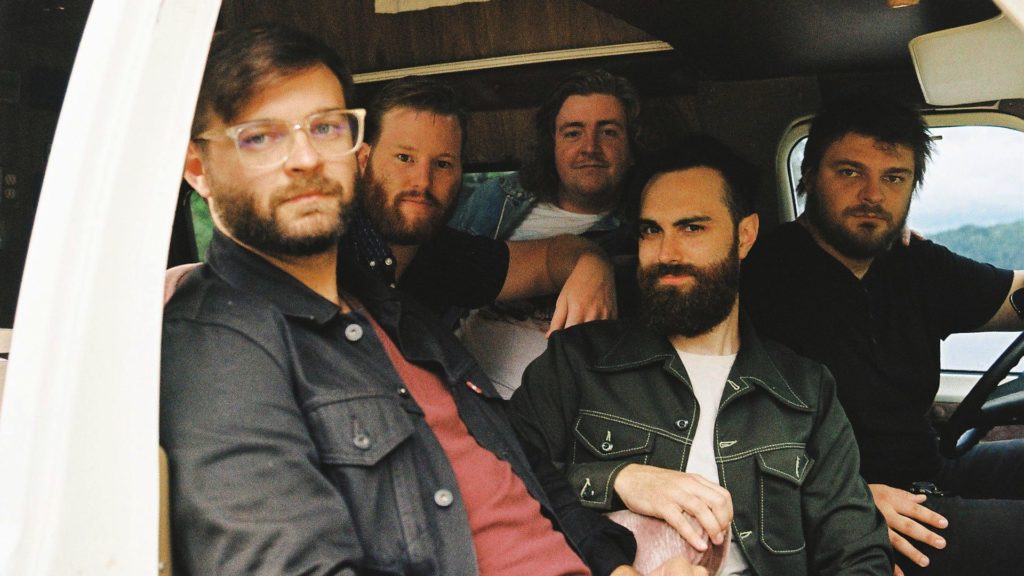 Long Range Hustle is a five-piece indie rock band based in Toronto. On Feb. 25, the band is set to release its third studio album, I am alive, but only if you say I am.

Reuniting with acclaimed Scottish producer, Tony Doogan, Long Range Hustle recorded the album in the tumultuous summer of 2020 at the storied Bathouse studio in Kingston, Ont.

The band is playing Lee’s Palace in Toronto on Feb. 25 for their album release show. Let’s meet Long Range Hustle.

The pandemic has existed in two halves for us. In the early days of the pandemic, when everything felt upside down, we tried to maintain some routine by doing daily lunch-time live-streams over Instagram live, and hosting occasional Zoom trivia nights for our fans. Anything to keep a semblance of community going.

Through 2020, we were actively working on writing and recording our new album. That goal served as a guiding light in an otherwise very difficult time. The forward momentum of creating new music was able to curtail a great deal of the sense of listlessness that was otherwise ever-present.

After the album was done (c. end of 2020)  is when we then had to grapple with the fact that our greatest skill set — live performance — was no longer useful. Over the past year, we shifted our focus to producing video content. Our drummer (AJ Fisico), has been a bit of an aspiring director for a few years now, and this concert-less world we found ourselves in gave him the perfect opportunity to develop those skills.

Tell us about your new project.

Our upcoming album “I am alive, but only if you say I am” is a serious evolution for the sound of Long Range Hustle. The recording process was a little more drawn out than usual (more on that later), and it gave us the chance to explore some different sounds. The songs on the album are, as is typical for us, very distinct from one another. At times we draw on our heavy roots, and layer up the distorted guitars. Other times we pull from our penchant for sparser arrangements and let a few longing piano chords stand up on their own. In particular, we’ve incorporated a greater degree of electronics into this album. Almost every track has a couple  synthesizers layered into it; a few songs are even built around pulsing sequencers and hypnotic arpeggiators. Because our recording schedule was delayed (we’d originally been slated to record in May 2020), we ended up with extra time to hone in this set of songs. The result is a tighter, more deliberate sound that we are honestly really proud of.

You could probably boil down the Long Range Hustle sound as a blend of old-school Canadiana (think The Band, The Hip), and more recent indie influences (Ben Howard, Car Seat Headrest, Old Sea Brigade). But we try to incorporate small nods to our myriad influences, whether it be traditional folk music, ambient electronica, or even prog metal. We try to balance surprising and exciting instrumental arrangements with catchy melodies and meaningful lyricism.

It’s worth noting, however, that a long long time ago at a community battle-of-the-bands an audience member suggested LRH sounded like Dave Matthews Band meets System of a Down. We should probably put that on a business card.

How has the pandemic influenced your work and music?

The pandemic made some pretty significant impacts in the way we produced our new album. The pre-production process was entirely remote, with each band-member recording demo takes from their own home, and assembling them a-synchronously. This was a bizarre change in approach for us, but it gave us more time to consider the details of what we were playing. This is a big reason why “I am alive…” has a much tighter feel than our last album, Town, which had a largely live-of-the-floor pre-production process.

While the band was able to get together in person at The Bathouse studio near Kingston, our Glaswegian producer Tony Doogan was not able to join us. Instead, we linked the control room of his studio in Scotland directly to The Bathouse over the internet. We kept Tony’s video feed on a tablet that we could take from room to room with us. While the time-difference was an interesting hurdle to jump, we were able to record a high-quality album with a great deal of real-time interaction with Tony.

More recently, it has also had the unintended effect of pushing us to start songs in a softer, more muted space. Because there have been fewer chances to gather for a raucous jam session, some of our recent proto-songs are more evocative of the quiet living-rooms in which they were written. It will be interesting to see how this affects the direction of our next album.

What are you hoping people take from the new Long Range Hustle album?

The new album touches on memory, and how you change and re-evaluate your past experiences as you grow and change in the present. Inevitably, you will learn to live with your mistakes. And how you grapple with those mistakes helps define who you are. Those mistakes might be in romantic relationships, family relationships, or your relationship with yourself (all things covered in “I am alive…”). But they pass, and you’ll learn to look at them like a stack of old photographs that show a distant version of yourself that you mostly remember.

The five of us all come from different backgrounds from being self taught musicians to having a post-secondary degree in music. However, the common trait among us is our desire to perform and write original music.

Paul and Jay both started playing live music in high school coffee houses, where they became friends and developed a mutual admiration for each other’s playing style and obvious proclivity for live performance. For Jay’s 18th birthday, Paul bought tickets to see The Tragically Hip’s show in Kingston. At that point they’d been playing together for a few months, but it was on the drive home, in the afterglow of the magic that is a Hip show, the two decided: Let’s be a real band.

The two went to University of Waterloo together, found a group of friends who played bass, guitar and drums and started playing as much as possible and in as many places as possible across Ontario. Through the years of University the current band lineup fluctuated with some great friends deciding to move onto other non-musical pursuits and the band’s lineup eventually solidified. By the time AJ, Mike and Ryan had all joined, we were ready to record our album Town at The Tragically Hip’s Studio, the Bathouse, in Bath, ON. Inside there a poster was hung for the Tragically Hip show that Paul and Jay went to in highschool that sparked the band’s origin. While there are many points in the journey through which commitment to the pursuit is tested, but it was in discovering that poster upon arrival to the studio that we knew we were in the right place.

For us, songwriting is a crucial tool for processing emotion. Good songs are written while you’re still figuring out how you feel about a subject. And that process of piecing together the words and melodies mirrors the way you piece together your own emotions into a cohesive feeling. As long as you are still learning, changing, and growing, there will be new experiences to process and new songs to write.

We have a handful of haunts that we like coming back to again and again: The Mansion in Kingston, The Horseshoe in Toronto, The Casbah in Hamilton, just to name a few. Over the years, we’ve found ourselves in all kinds of places though. We’ve played on some big festival stages, but also in bizarre and sometimes DIY venues. We once played in a windowless building that was clearly a former strip club. Or there was the time we set up in our friends loft apartment and had the police called on us, only to have them watch the rest of the show along with everyone there.

What message do you have to those eager to check out Long Range Hustle and see you live when possible?

For us, this is a very unique album cycle. Traditionally, we road-test our new material extensively before we go to the studio. But this set of songs was produced entirely within the pandemic, and we have no idea how they will hold up in a live setting. When we do get on the road, these songs will be just as fresh for us as they will be for the audience. That is a slightly scary proposition, but it is also exhilarating in its own way.

If you’re thinking of coming to an LRH show, this will be a special opportunity to share that emotion with us. There is a lot of pent up energy behind this release as it has been delayed along with the limited ability to play live shows and see friends and family, so these shows will be intensely cathartic.

Let’s share a moment together, it’s been too long.