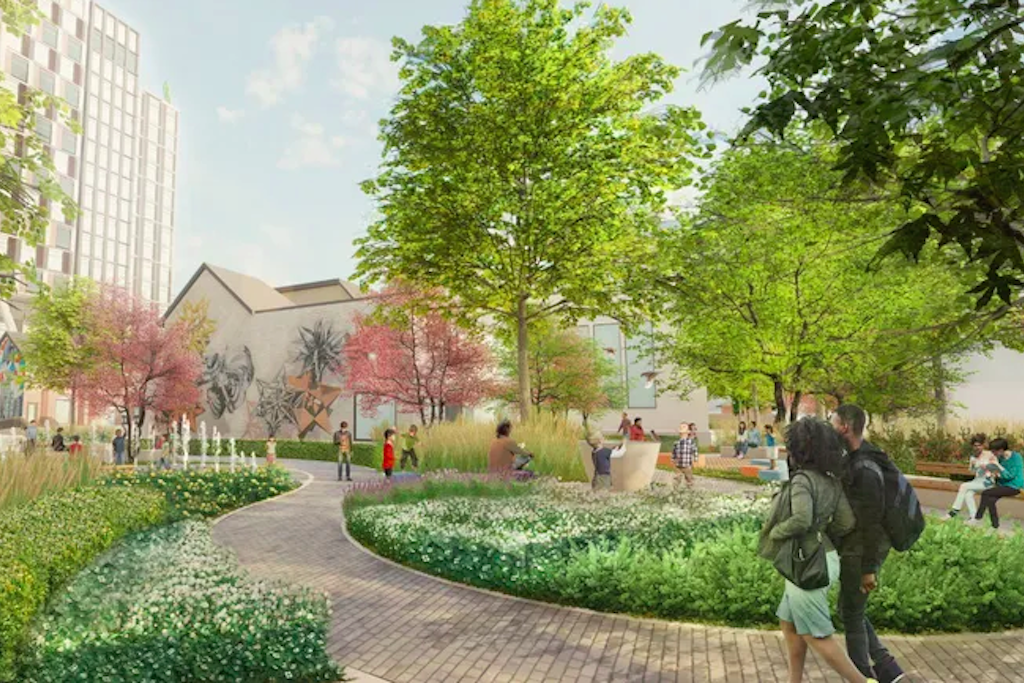 Plans are coming together for a new park for the Annex neighbourhood, which is part of the huge Mirvish Village redevelopment at the corner of Bathurst and Bloor.

A community consultation was recently held for Mirvish Village Park where residents were able to see the latest designs.

The 13,000-square-foot park could include a raised hardscape, an interactive water feature, seating galore and a swirling path that takes design cues from the landmark and very-glittery Honest Ed’s sign.

However, given the relatively small size of the park, local councillor Mike Layton warns that the park can’t be “all things to all people.”

“It’s trying to make a bit of a green oasis in what will be a lot of concrete,” he said.

The park will be located at the northwest section of the redevelopment that will include five new residential and commercial towers, as well as a marketplace and a revitalized Markham Street, which the park will face. Its opening is targeted for 2022-23 in line with the completion of the rest of the project.

Mirvish Village Park is being designed by the same Vancouver-based team that redesigned Grange Park near the Art Gallery of Ontario.

PFS Studio was hired after a previous design team made plans the community thought were too busy, according to local resident and Annex Residents Association board member Terry Montgomery.

“That’s something that I’ve never seen before, where a developer responds to residents to that extent,” he said.

Montgomery said he and the community are now very pleased with the design, which makes the park a “quieter, more meditative” space.

“It doesn’t feel like a place for hordes of people,” he said. “It’s a nice complement to the other elements in the village.”

The park might also have access to retail on the north side, so visitors can stroll up and grab a coffee if they wish, according to Montgomery.

One concern he does have, though, is security-related, given that the southern portion of the park is somewhat hidden and leads into an alleyway.

“I just hope that area doesn’t get appropriated by the wrong people that are kind of hidden back there,” Montgomery said. “That’s my concern.”

Overall, he feels the park will improve the whole quality of the redevelopment.

“It’s a small part of the whole Mirvish Village, but I think it’s an essential part,” he said,