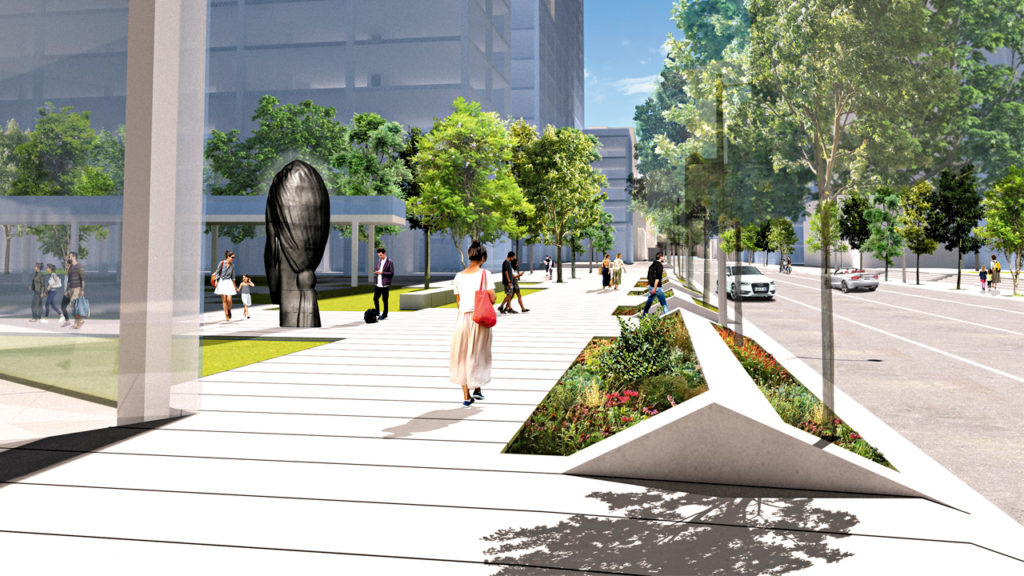 A group of concerned citizens and an architecture firm are proposing to create a new linear park along Avenue Road to improve walkability and safety.

The proposal calls for the stretch of Avenue between Bloor Avenue West and St. Clair Avenue West to be reduced from six lanes of traffic down to four, which would allow for sidewalks to be widened 240 per cent from their current width and accommodate 500 new trees.

The vision comes from Brown + Storey Architects Inc. and is in collaboration with the Avenue Road Safety Coalition (ARSC), a group of residents advocating for Avenue Road to be safer.

The idea would be to widen the sidewalks that are currently 2.5 metres to 3.5 metres on one side and 8.17 metres on the other to create an asymmetrical public space along the road. One side’s extra-wide sidewalk would be double lined with trees and feature a “sloping garden” and, potentially, public art and performances.

The whole corridor would be the equivalent of a new public park, said James Brown, co-founder of Brown + Storey, and would connect to existing public spaces such as Ramsden Park and University Park.

“A lot of people walk and use that space that, if it were to be transformed, would be kind of a sea change for the city,” he said.

Brown hopes to build momentum for the project by engaging with the city and community and eventually get city councillors on board. He aims to make it a reality in two to three years’ time.

According to Albert Koehl, a co-ordinator with ARSC, Avenue Road is currently a “hostile” environment and quite dangerous.

“Speeding is endemic in that area,” Koehl said. “There are lots of students and seniors on that street that avoid Avenue Road, because they don’t feel safe.”

There have been 15 serious or fatal injuries on the road since 2016, according to Koehl, including a car crashing into a church and the fatality of a cyclist.

Avenue Road was widened to allow more traffic in the 1950s, but that in turn made the street into a throughway, according to Koehl. He added that a reimagining of the road will help with safety, as narrower roads will provide a “visual cue” for drivers to slow down.

“The problem right now is that it looks and feels and serves like a speedway because it’s a straightaway,” he said. “Speeding is very common.”