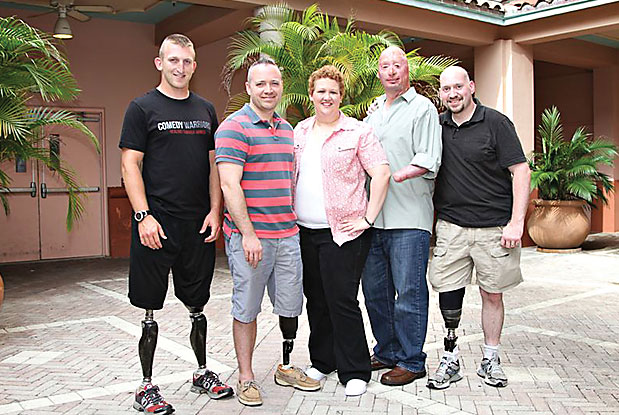 Comedy Warriors, screening this month at the Toronto Jewish Film Festival, is a documentary unlike any I’ve ever seen. It follows five aspiring stand-up comics from the U.S. who have been severely wounded in battle in Iraq and Afghanistan.

When I say severely wounded, I’m talking about amputations and full facial burn traumas. These are the kinds of disfigurements that would stop lesser men and women from going to the supermarket, let alone performing jokes about themselves in front of complete strangers in nightclubs.

Comics such as Bob Saget, Zach Galifianakis, Lewis Black, B. J. Novak and others were assigned a “wounded warrior” to coach, either by Skype or in person. You can watch the process as the fledgling comics shed their fear, find their comic voice and perform comedy material dealing with their horrific pain and by so doing transcend it.

And then you can watch Saget, Black and the others make the jokes even better by lending their experience and talent.

The five comics-in-training all have their own tragic story.

Rob Jones is a Virginian who was in Afghanistan sweeping for improvised explosive devices when one found him and severed both legs above the knee. Steve Rice was wounded in a similar way in Iraq.

Darisse Smith, the only woman of the five, had a spinal cord injury that gave her pain so debilitating that she became addicted to drugs. Now she has an implant with a hand control that blocks the nerve at the site of the spinal injury.

Two of the comics will be venturing to Toronto to take part in the screening and to perform. Joe Kashnow is from Baltimore. His leg was amputated after he was wounded from a roadside bomb in Iraq. “I zigged where I should have zagged,” he quips. He is also an observant Jew, and the role that his faith plays in his rehabilitation is a major part of his story in the film.

Bobby Henline has perhaps the most moving and disturbing story. A career soldier since he was 19, he re-enlisted after the events of 9/11, only to be nearly killed in an attack on his five-man Humvee that left the other four dead. Fighting for his life for six months in the hospital, he lost his left hand and had massive facial reconstruction, which could only partially repair the damage.

It’s shocking and courageous, scary and liberating all at the same time. The other comics in the film, wounded as they are, can put on a pair of long pants and pass undetected. Henline has nowhere to run.

The scenes of Bobby at home with his devoted, loving wife and kids moved me to tears. I completely lost it. Amazingly, none of the comics, at least in the documentary, take issue with the military for their condition. I was torn between my revulsion for a war that could so injure these people and my unabashed admiration for them. I suspect the reaction to the film here in Canada may be more complicated than in the U.S.

The film will be playing through the second week of May at various TJFF locations, and Henline and Kashnow will be appearing at Yuk Yuk’s on May 11. Watching them, live or on film, will be a transformational experience.