New cycling infrastructure arrives in Toronto, so why does it still seem so dangerous? - Streets Of Toronto
Skip to content 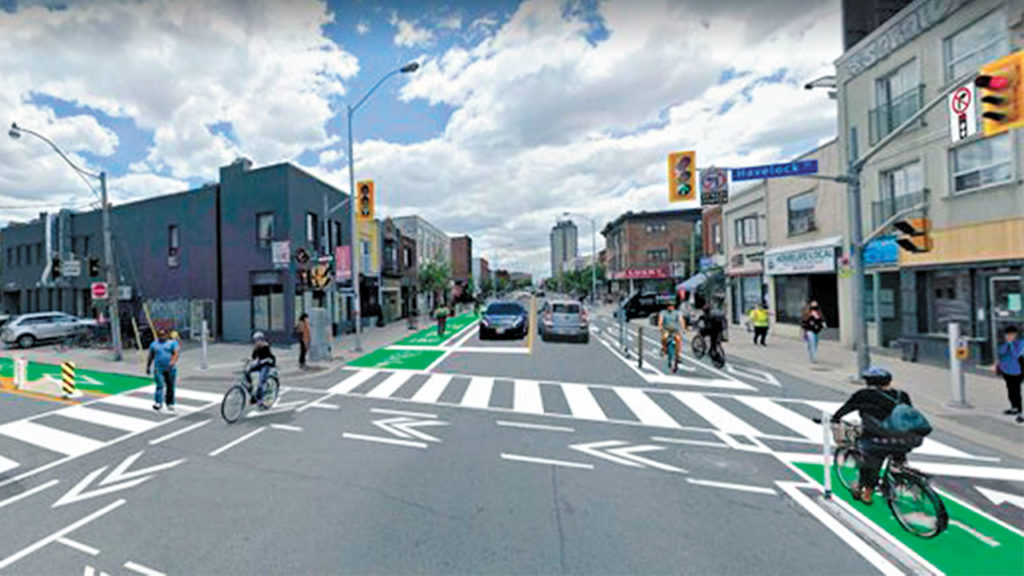 Midtown Toronto is getting some much-needed upgrades to existing cycling infrastructure heading into the colder weather, but a fulsome network that will keep bike commuters on safe and separated lanes is still nowhere in sight.

Recently, the city revealed that improvements are continuing along Davenport Road, with bike lanes from Avenue Road to Belmont Street to be upgraded to cycle tracks with curbs and posts added in the painted buffer, where feasible. Upgrades to cycle tracks were completed from Bedford Road to Avenue Road earlier in August.

As this area of the city bordering Yorkville and the Annex neighbourhood continues to grow, having safe cycling infrastructure in place is key. Right now, the network falls short on Dupont Street before it morphs into Davenport. That stretch is a serious danger zone with roads crumbling and pot-holed and atrociously unsafe for those travelling by bicycle.

Avenue Road is another example of an unsafe roadway for both cyclists and pedestrians. Although the city is studying that stretch, it isn’t moving too quickly. Just yesterday, a cyclist was hit while trying to cross the very wide and very busy Avenue Road on Cottingham Avenue.

In a survey last year, the Davenport bike lanes prior to improvements were rated amongst the worst by the Toronto Community Bikeways Coalition.

James Young, of Cycle Toronto Midtown, is supportive of the improvements.

“It is one of the more heavily used, as it is a diagonal conduit from the northwest downtown to the Bloor-Danforth,” he explained. “I do not have numbers, but although it does not fall in our Ward, we often talk about it, as many in our area use it.”

Young said Davenport was a treacherous area for cyclists prior to the improvements.

“I would say very [treacherous], as Avenue Road has six lanes to cross and the southbound tends to have high speeds due to the distance between lights,” he said.

Although it is a good start, many cycling advocates in the city would like the entirety of Davenport all the way to Old Weston Road upgraded with safe infrastructure. With such separate and safe cycling infrastructure, people will be encouraged and feel comfortable riding their bicycles to work, even in cold weather. Or at least that is what Young thinks.

“Cold weather isn’t as much of a hindrance to riding,” he said. “Slippery surfaces are, so if the surface is good the temperature is not a major factor. I ride year-round and I am no tough guy.”

Other improvements on tap for the city include the Bartlett-Havelock-Gladstone Cycling Connections project that will see road safety improvements on Bartlett Avenue, Havelock Street and Gladstone Avenue from Davenport Road to College Street.

A safe cycling network is only as good as its weakest link, and the city has far too many weak links at the moment. Add to that, the high level of construction activity and bike lane blockers such as delivery trucks that continue to put vulnerable road users at risk.

Any new infrastructure that provides a safe, separate cycling pathway is something to celebrate. But, with more and more large urban centres across North America and Europe announcing massive new cycling network plans, from Boston to Canadian cities like Edmonton, Montreal and Quebec City, one wonders when Toronto will start thinking a bit bigger.