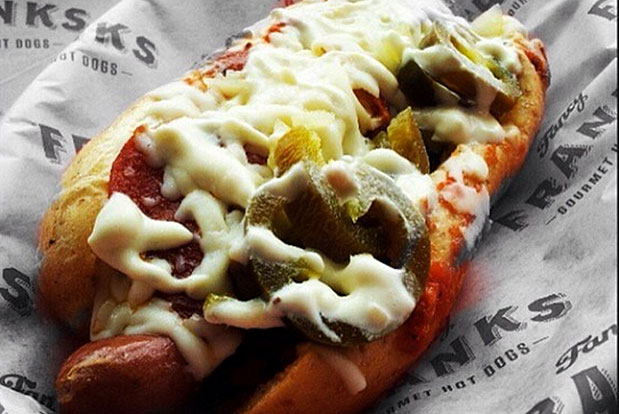 The best words in the English language often come in sets of three. "I love you." "You are welcome." "Here's a dollar."

But there's a very special place on that list reserved for three delicious, mouth-watering syllables. "Free hot dogs." Say it with us now. Draw out those words like you're slowly drizzling mustard on a steaming, hot-off-the-grill sausage. "Free. Hot. Dogs."

This Wednesday, those three words are the operative ones at Fancy Franks, the College Street and Bloor Street purveyors of—yes, you're reading this right—gourmet hot dogs. A presence on the local food scene since 2012 that's been building an eager local following, the restaurant has become known in short order for everything from eggs-and-bacon poutine to turkey sausages, to name just a couple. For two years now, they've also built something of a reputation for supporting good causes, namely those with helping children at heart.

It all started with a little inspiration. Owner Angelo Economopolous looked south of the border to the United States, where—among other places—National Hot Dog day is an annual occasion with all the pageantry of a festival. Along with Australia, Great Britain, and a few communities in Canada, it's often an event marked by contests, parades, and of course, the universal appeal of free franks. But it's also an opportunity to support charities, either by raising funds or raising publicity.

To Economopolous, it's the former that appeals.

"Last year's [event] was a huge success," he tells Post City. "We had an ambassador from Sick Kids Hospital, so Sick Kids got behind it. We gave away 3,000 free hot dogs to anyone who came. We had a DJ, a clown giving away balloons to kids. Basically, we just tried to get behind the whole National Hot Dog Day that they do in the United States."

Though it's celebrated in Vancouver and elsewhere, Economopolous believes his franchise is the first to officially make National Hot Dog Day a part of Toronto's calendar. "From what I know," he says, "Fancy Franks was the first to do this." Perhaps owing to the local novelty of it all, the 2013 event, he says, was a resounding success. "It was a huge success for the kids; we raised over 2,500 dollars. We were very happy with that."

Economopolous recalls residents of a nearby retirement home showing up at the College Street location, wheelchairs and all. There was a DJ, clowns twisting up balloon animals, and of course, free meat flying off the grill for all takers. At the time, Economopolous suggests, it was hard to imagine National Hot Dog Day going better for anyone involved.

This year, Fancy Franks plans to raise that bar. "We're hoping to double our free hot dogs," Economopolous says, floating 5,000 as a tidy benchmark for success. "We've brought in cotton candy, buttons, sunglasses, T-shirts. There will be face painting; we're going to have a clown there again this year. We've also invited a few of the mayoral candidates. We've invited Olivia Chow, Mayor Ford, and John Tory. If they are downtown, it'd be nice for them to drop in and show their support."

"Our main thing," he says, "is to see how much we can raise for the kids this year, and I want that number to grow every year. I have three kids of my own, and we're so lucky to have Sick Kids in this city."