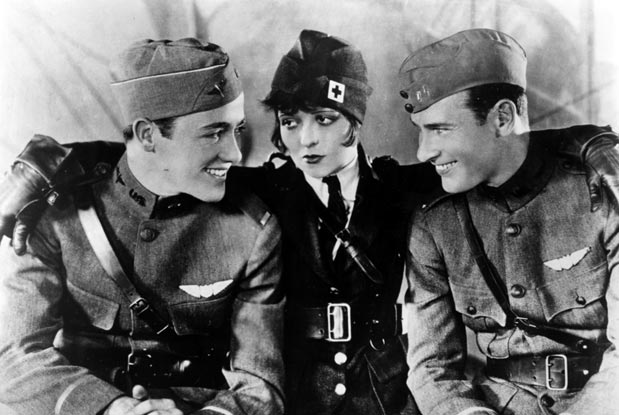 Before The Artist swept the Oscars, there hadn’t been a silent film to win the Best Picture Academy Award since Wings, back in 1929. The film was thought lost until it was found in the Cinémathèque Française film archive in Paris. It’s since received a stunning digital restoration, and it flies back to the big screen tonight at TIFF Bell Lightbox.

Regarded as a Star Wars or Avatar of its day, Wings is notable for several reasons: its aerial battles, a semi-nude scene involving Clara Bow (the it-girl of the era, who famously complained that her nurse role was “just the whipped cream on top of the pie”), a drinking sequence in a Paris bar and some man-to-man kissing.

Though modern movie-goers have critcized that too much time is given to the been-there-done-that plot line of two men (Charles “Buddy” Rogers and Richard Arlen) being in love with the same woman (Jobyna Ralston), the aerial “dogfight” scenes are some of the best flying sequences ever captured on film, and truly something to behold on the big screen.