Mount Pleasant Cemetery to reopen gates this week, but will remain closed on Mother's Day - Streets Of Toronto
Skip to content 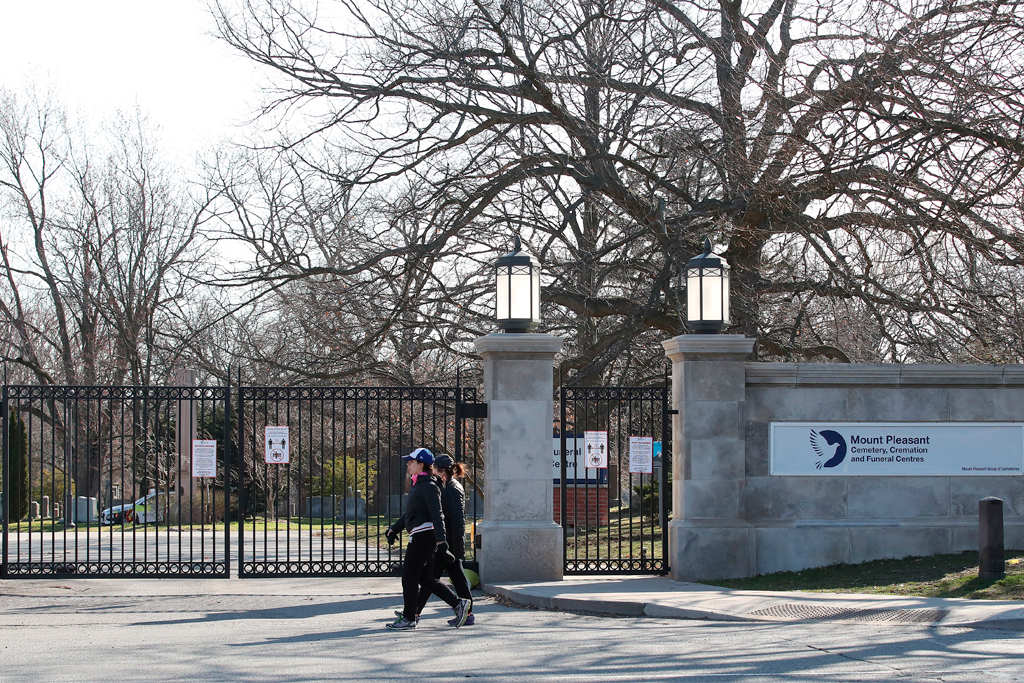 Mount Pleasant Cemetery will reopen its gates to the public this week, after its month-long closure due to the COVID-19 pandemic.

The Midtown green space, which spans from Bayview Avenue to Yonge Street, will open from 5:30 p.m. to 8:00 p.m. starting this Thursday. The announcement came after Mayor John Tory vowed to speak to the cemetery operators about a possible reopening for Mother’s Day.

“I will speak to them this week and just see if they could [reopen], especially on that one day,” Tory told CP24 on Tuesday.

Unfortunately, a spokesperson for the Mount Pleasant Group of Cemeteries [MPGC], said the cemetery will not open on Sunday due to physical distancing concerns.

“It’s not a decision we enjoyed making. It’s just that Mother’s Day attracts such large crowds,” said Rick Cowan, assistant vice president of marketing communications for MPGC. “Mother’s Day is the busiest day for every cemetery in the province. … We’ve had people lined up in cars outside of our cemeteries trying to get in, in the past.”

According to Cowan, the group was able to share their plan with the mayor earlier today.

“We were able to get in touch with him, and he was very receptive to what we had planned,” said Cowan. “But we know in the interim it causes a lot of concern for families who have loved ones there. We appreciate how difficult it is.”

The cemetery closed to the public in early April after concerns were voiced about a lack of social distancing on the grounds, despite a new city bylaw banning people from standing within two metres of each other in public parks and squares.

Following news of the closure, a local residents group publicly challenged the decision and called upon Tory to intervene on behalf of local residents.

Local councillor Josh Matlow also got involved and was reportedly working to see the gates reopened. In an earlier interview with TRNTO, Matlow said he had brought the matter to the mayor — who had been granted the powers of council due to a state of emergency declaration.

Moreover, I am requesting the Mount Pleasant Group of Cemeteries create a plan to ensure people can, while adhering to social distancing, visit loved ones buried there. I’ve consulted directly with public health staff and they’ve suggested ways this can be done safely.

Speaking to CP24, Tory spoke in favour of a reopening. The mayor said he had visited the park prior to the closure and was encouraged by what he had witnessed.

“I saw people actually following the physical distancing rules, in terms of standing apart when they had conversations and walking separate from one another,” said Tory.

So now that locals will once again be able to access the green space, the hope is that visitors will continue to practise safe social distancing.