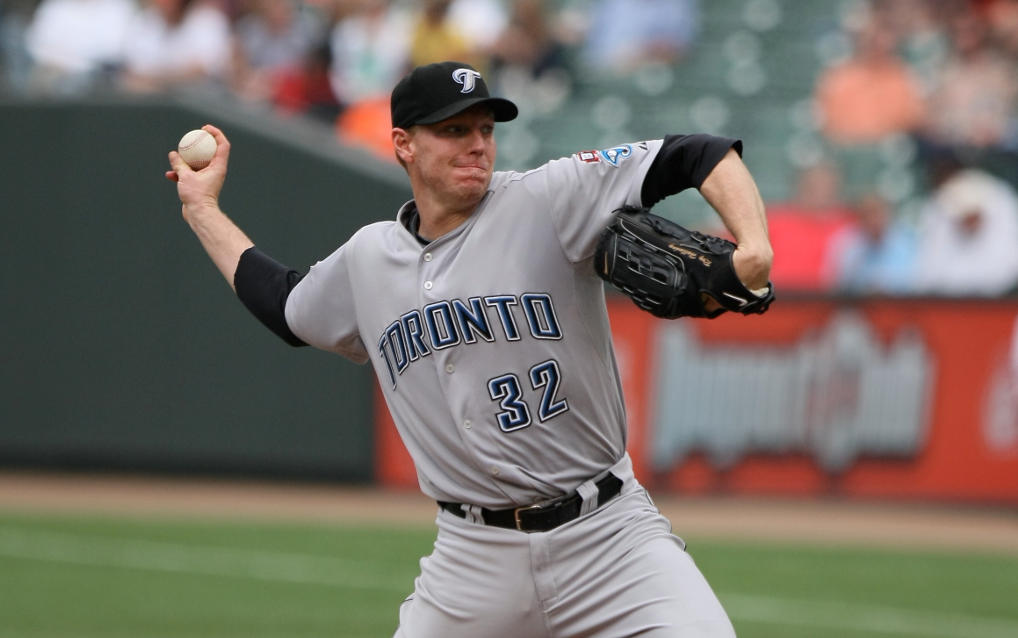 This weekend at the Rogers Centre, the Blue Jays commemorated the best pitchers in franchise history (Josh Towers and Gustavo Chacin were nowhere to be found, sadly). So we thought we’d put together our own list of honourable hurlers.

Note that Hall of Fame calibre pitchers like Roger Clemens, Jack Morris and Phil Niekro were left off as they did not pitch the majority of their careers with the Jays.

This list is in no particular order, except for…

1. Roy Halladay. The 6’6” Denver native is far and away the greatest pitcher to don the Blue Jays uniform. Built like a country farmhand/grizzly bear, Doc was the definition of a workhorse, throwing at least 220 innings six times as a Jay, including a career-high 266 (!) in his Cy Young award-winning 2003 season. Unfortunately, Halladay’s old-timey greatness was completely wasted by the mediocre Jays teams around him (he shared a rotation with the likes of Cory Lidle and Mark Hendrickson in his stellar 2003 campaign), and didn’t see a single postseason appearance until after his trade to Philadelphia in the 2009 offseason. All Doc did was throw a no-hitter in his first-ever playoff start in 2010. So, you know, he was ridiculous. As well as the Jays’ rotation has performed in 2016, one can’t help but wish Halladay was still taking the mound.

2. Dave Stieb. The mustachioed right-hander was Halladay before Halladay was Halladay. Stieb pitched 15 years of his 16-year career with the Jays, including a remarkable comeback at age 40 in 1998 after nearly five years out of baseball. The seven-time All-Star won 140 games in the ’80s, the second most of any pitcher that decade behind Jack Morris. The fiercest of competitors, Stieb battled injuries in the ’90s and was released in 1992, the year the Jays captured their first of back-to-back World Series titles. The franchise did still award Stieb a ring and later inducted him into their Level of Excellence.

3. Pat Hentgen. The first Blue Jay to win a Cy Young Award, Hentgen was a mainstay of the rotation in the ’90s. He threw 10 complete games and three shutouts during his award-winning 1996 season, facing 1,100 batters while only giving up 20 home runs, the fewest per nine innings in the American League. Hentgen now serves as a special assistant to the Jays organization.

4. Jimmy Key. The best left-handed starter in franchise history, Key was a control specialist over his nine years with the Jays. Blessed with nasty breaking stuff and a killer pickoff move, Key finished as runner-up for the AL Cy Young award twice — behind ex-Jays both times (once to Roger Clemens in 1987, and once to David Cone in 1994).

5. Tom Henke. “The Terminator” was the most fearsome closer the Jays ever had (sorry, Billy Koch and  B.J. Ryan). He locked down 217 saves in his eight years with Toronto, recording a microscopic 2.48 ERA in that span. Henke saved 34 regular-season games in 1992, as well as five postseason games, helping the Jays to the ’92 title. Plus, those huge-rimmed glasses were way ahead of their time fashion-wise.