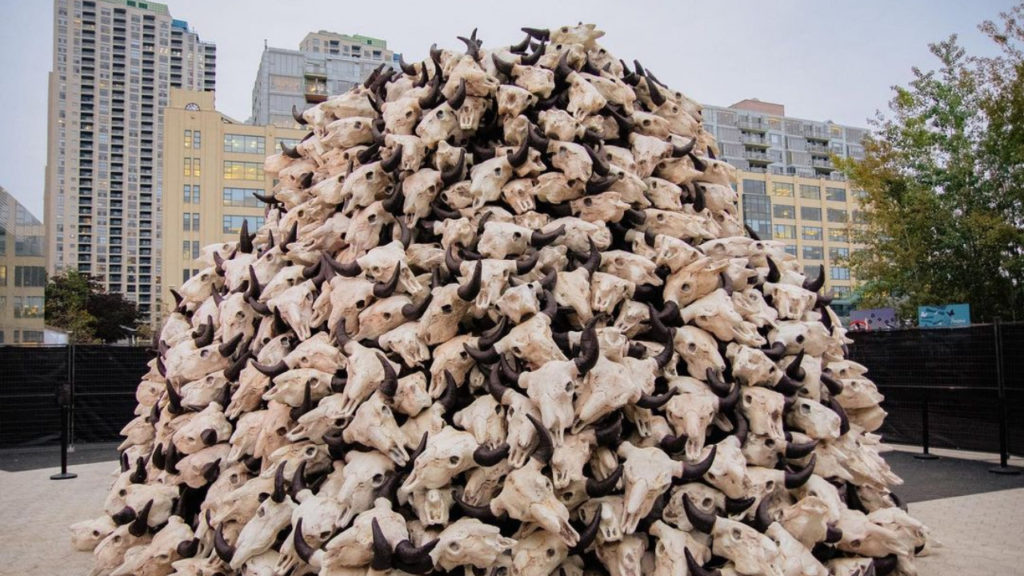 If you happen to be walking along the Harbourfront this weekend, you might stumble across a massive pile of buffalo skulls. This isn’t leftover animal waste from a hunter with an affinity for endangered species, but rather a major feature of the Luminato Festival’s newest installation called Built on Genocide.

The installation was revealed on Sept. 22 and will be available for free viewing until Oct. 24, but the timing of the display, created by Indigenous artist Jay Soule, also known as CHIPPEWAR, seems ideal for this long weekend, when families may be preparing for Thanksgiving. Built on Genocide explores themes of cultural genocide and colonization and reflects on events throughout Canada’s history that have destroyed Indigenous lives.

The main installation of the buffalo skulls reflects the Canadian government’s mass slaughtering of buffalo during the time of colonial railway expansion. In order to take over land that wasn’t theirs, government officials orchestrated the mass killing of buffalo herds to destroy the livelihoods of many Indigenous communities and drive them off their lands.

The artist based the skull mound on historic photos from the late 1800s of piles of buffalo bones after the killings.

“Built on Genocide will address the direct correlation between the genocide of the buffalo and the genocide of Indigenous peoples in Canada,” CHIPPEWAR’s artist statement reads.

Twenty images accompany the display, each reflecting the different ways the buffalo genocide affected Indigenous peoples. A QR code will be available at the front of the display to give more context on the images and themes present in the 14-foot-tall installation.

“Built on Genocide is an expansion of all of my work to date,” said CHIPPEWAR in a statement. “It reveals the truth of settler colonialism, systemic racism and the ongoing reality of being Indigenous in the illegal apartheid state of so called ‘Canada.'”