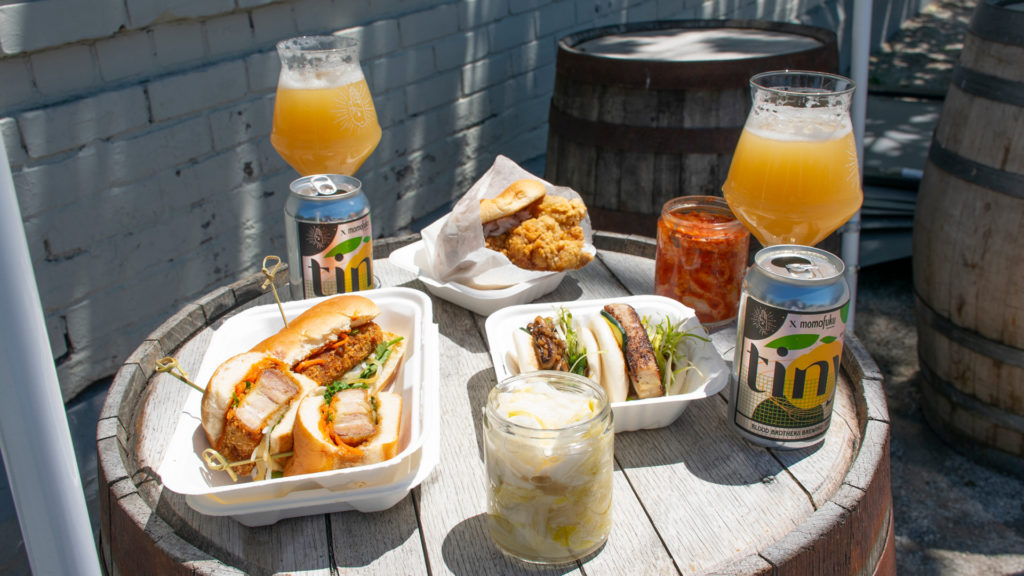 “The biggest similarity between Blood Brothers and Momofuku is that both take an out-of-the-box approach to our recipes,” says Brayden Jones of Blood Brothers Brewing.

It’s that out-of-the-box thinking that led the two brands to offer a pop-up for the summer months, operating out of the microbrewery’s space at Dufferin and Dupont.

“This relationship with Blood Brothers has been in the works for a long time. What started as a conversation about a kitchen takeover has now turned into a long summer romance that also includes an exciting beer collaboration,” says Noodle Bar chef Hans Vogels in a press release.

The intent, Momofuku Noodle Bar notes in the release, is to offer its menu to fans beyond the restaurant’s Financial District home, while also continuing to operate out of their space at 190 University Avenue. Momofuku will soon also be opening another pop-up at Stackt Market at 28 Bathurst Street with the same intention.

The menu for the pop-up at Blood Brothers Brewery sees the introduction of the pork katsu sando, which is a baguette topped with whipped nduja, panko-friend pork belly, cilantro and pickled daikon; as well as the popular spicy chicken sando, which is finished with ramen seasoning and kewpie mayo.

The beer collaboration, called Tiny IPA, is a smooth brew with notes of white grapes, tropical fruit and bright citrus. “I really enjoyed pairing the collaboration beer we did with Momofuku called Tiny IPA and the pork katsu sandwich,” Jones says. “I found that the bright citrusy notes from this 4% IPA were the perfect complement to the breaded, deep-fried pork belly sandwich.”

The pop-up has been very positive so far,” adds Jones. “The neighbourhood is happy to have another great food option on the street and we’re excited to see our kitchen back up and running.”

The Blood Brothers and Momofuku pop-up will run from June through August, with the possibility of extending it from there. “For the time being we plan to continue doing pop-ups,” Jones says. “This gives us the opportunity to keep things fresh and rotating — kind of like how we treat our beer.”

Blood Brothers Brewing is open Wednesday to Sunday from 1 pm to 7 pm.