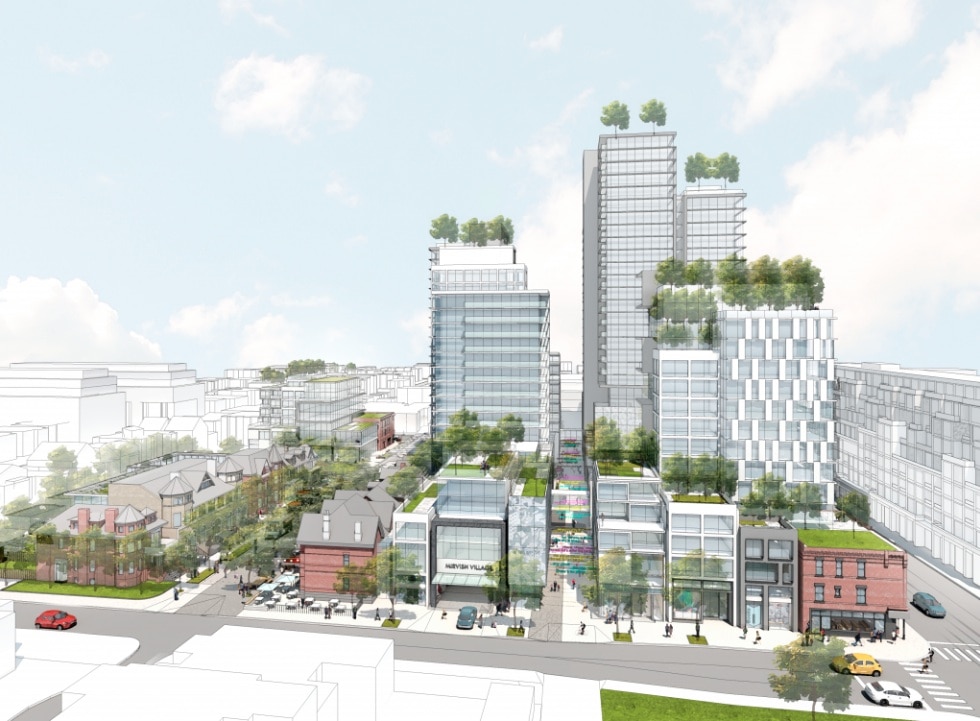 Toronto is getting 366 more units of affordable housing at Mirvish Village. A financing agreement was announced at a press conference on Jan. 16 between the developer, the city and the federal government.

The Mirvish Village development includes six residential buildings and 916 units. The mixed-use community includes 100 per cent rental dwellings at the site formerly occupied by Honest Ed’s at Bloor and Bathurst.

It’s a historic day for Mirvish Village. Minister @HonAhmedHussen has announced that the federal government will finance $200m to build 916 rental units on the site of the former Honest Ed’s. 366 of these units will be provided at rents at or below 30% of median income. pic.twitter.com/HedE5fR0wp

The new plan, back by $200 million in federal government financing, means that 366 units will be provided at rents at or below 30 per cent of median household income, and at 80% of average market rent for the City of Toronto. The affordable units will be scattered throughout the development.

“This funding for the Mirvish Village will help us preserve a historic and vibrant community in our city,” said Mayor John Tory. “Honest Ed’s was a beloved part of our city and by creating affordable housing on this vacant land we are able to address the housing challenges our city faces. I want to thank the federal government for providing this important funding. This $200 million commitment demonstrates the importance of all levels of government working together to address issues that impact Torontonians.”

“Today’s announcement reinforces our government’s commitment to creating homes that are affordable, energy efficient, and accessible,” said MP Chrystia Freeland. “By helping build communities such as Mirvish Village, where people can live close to jobs, schools, and public transit, we can make a meaningful difference in the lives of Canadians.”

The large amount of money involved, $200 million, for just 366 units of 80%-of-market housing, did not go unnoticed by some who questioned the logic of spending half a million dollars per unit to save people 20 per cent on rent.

$200 million in public money is going to a private developer for 366 units of “affordable” rental housing. That’s over half a million dollars per unit ($546,448 to be precise).https://t.co/NQE8UXGCHD