Inside MIMI Chinese, the first restaurant from the Sunny's Chinese team
Skip to content 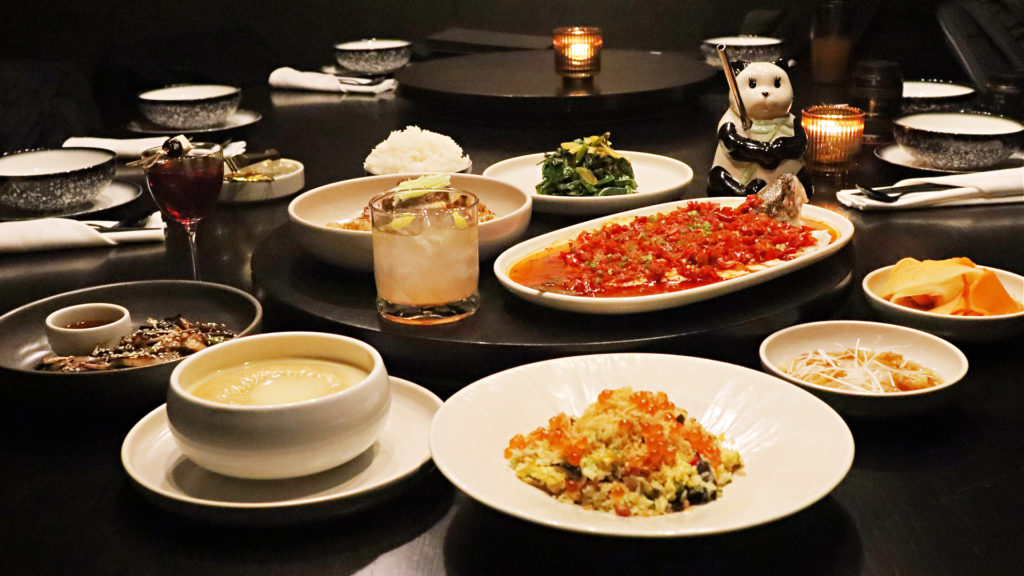 MIMI Chinese is the brick-and-mortar sister restaurant to wildly popular pop-up Sunny’s Chinese. With tables almost completely booked into mid-December, the new Yorkville restaurant is already proving to be equally as buzzworthy as Sunny’s (which is also set to get its own permanent location in the spring of next year).

The concept behind MIMI Chinese had been in the works for several years, according to chef and co-owner David Schwartz. When the pandemic put their spring 2020 launch plans on hold, Schwartz and his team, including Braden Chong and Keith Siu, like many restauranteurs, pivoted to takeout and launched Sunny’s Chinese instead.

“MIMI Chinese is all about the theatre of dining and it didn’t really feel right to open it starting off as a takeout concept, so we set up Sunny’s with a different name,” explains Schwartz. Like Sunny’s, MIMI Chinese shines the spotlight on regional Chinese cuisine, while drawing inspiration from American Chinese and Cantonese restaurants for its old-school ambiance. With servers dressed in starched white dress shirts and numerous dishes finished tableside, MIMI Chinese aims to channel the vibe of a retro steakhouse, according to Schwartz. These formal, showy elements are playfully juxtaposed with a distinctly modern menu and an unpretentious atmosphere.

Many dishes from Sunny’s pop-up have made their way onto the menu at MIMI Chinese. Schwartz and his partners are passionate about highlighting the origins of each dish and educating diners about the diversity of regional Chinese cuisine.

“On our menu, after each dish, it shows the province of inspiration, which is something that’s really important to us,” says Schwartz. “We want to start a conversation and have people engage.” The Pumpkin & Snow Melon is served chilled. “In Chinese food culture, you’ll often find fruit on the table before, during and after a meal,” says Schwartz. “It’s a really great way to balance out all of the intensity and the salinity and everything else that’s going on at the table.” The Supreme Fried Rice with salted egg and lap cheong (Chinese sausage) can be topped with fresh salmon roe for an extra charge. The Stir Fried Rice Rolls are tossed with white truffle and three kinds of soy sauce. The show-stopping Four Foot Belt Noodle, true to its name, stretches out to a full four feet. It’s cut into more bite-sized pieces at the table. Chinese ingredients are at the heart of the cocktail menu, which includes many bevies that riff on classic drink recipes. The Mimi Manhattan, for example, puts a spin on the traditional whisky cocktail by adding Cantonese rice wine to the usual rye and Italian vermouth combo.

The Bet It All on Red pairs housemade ginseng bitter, red bean and ginger with reposado tequila. The Jungle Panda brings a Tiki-style twist to baijiu, a Chinese spirit, by blending it with rum, elderflower and Campari.

MIMI Chinese also features an impressive sake list, including barrel-aged varieties and magnum-sized bottles ideal for sharing at the table. “We wanted the funkier sakes because they’re more robust and able to hold up to the food better than sakes that are super subtle,” says Schwartz. “It’s unique to find sake like this being paired with food other than high-end omakase or Japanese food. But all through China, there are restaurants like ours that pair sake with their food.”

MIMI Chinese’s dark, moody space takes a cue from classic steakhouses. “We’re not a steakhouse per se, but in terms of the style of service and the formatting of the menu, we want it to feel old-school. It’s a big thing in Canadian Chinese and American Chinese food culture  — the steakhouse meets Cantonese restaurant,” says Schwartz. There’s a neon-accented bar near the entrance, while diners can catch glimpses into a partially-open kitchen towards the rear of the dining room. With red booths popping against ink-black walls, MIMI Chinese creates an immersive experience. “It’s almost like a casino. There are no windows so when you walk in, you lose a sense of reality. You don’t know what day it is or what time it is,” says Schwartz. “It’s about experience and theatre and having fun when you go out to eat dinner.”