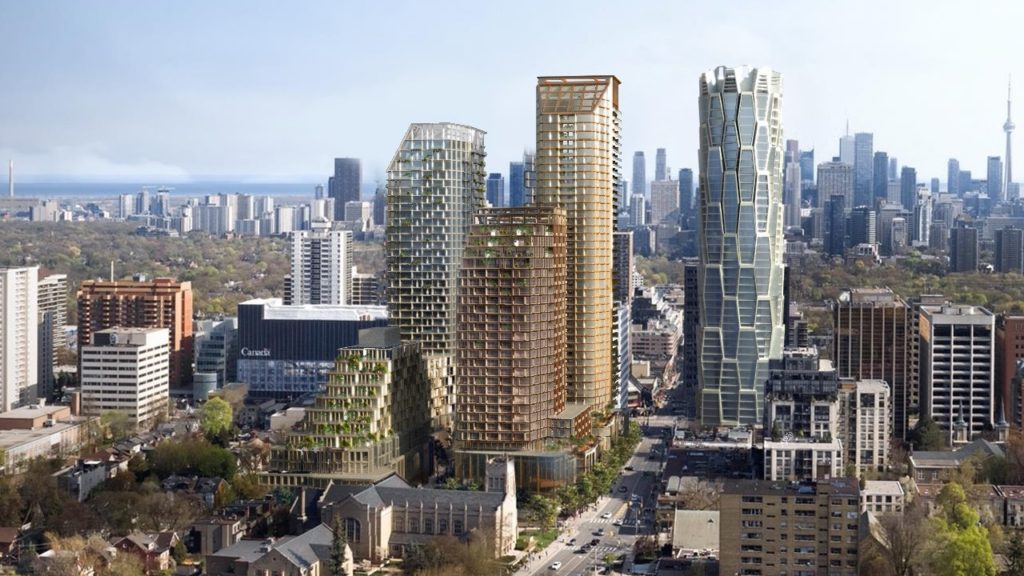 A new four-tower development at the northeast corner of Yonge and St. Clair is set to transform the area once it is complete.

Toronto city council approved the project at 1485 Yonge St. that will be developed by Wittington Properties Limited and designed by Diamond Schmitt Architects. The complex includes towers 44, 39, 27 and 13 storeys in height that will hold 1,361 new residential units total. They are made up of 405 one-bedroom plus den, 340 two-bedroom, 247 one-bedroom, 180 two-bedroom-plus den, 136 three-bedroom and 53 studio units.

The negotiations for the buildings resulted in a number of public space improvements as well, and these include a new public courtyard, the widening of the sidewalks to allow trees rooted into the ground rather than the current planters, as well as a new park at the northeast corner of the site. The intersection at Yonge and Heath will also be straightened as part of the deal to address safety concerns that Streets of Toronto/Post City has previously reported.

A new pedestrian network with large passageways through the development will include an entrance to the subway and a winter garden space in an enclosed glass area. In addition, the Deer Park library will be relocated to the site. There will be 18 affordable rental units within the project.

“Working together with the community, we were able to deliver a park, affordable housing, and space for a new library,” local councillor Josh Matlow said in a statement regarding the development.

Deer Park Residents Group President Cathie Macdonald said that the community initially did not want the development to move forward as residents were distressed by the amount of development happening in the area. However, since the province has mandated the creation of more housing, especially around transit stations, Macdonald admits that it couldn’t be stopped.

Instead, the community fought for changes to the application, such as moving an entrance from Heath Street to Alvin Avenue, which Macdonald said is a safer location. She admitted that it made the most sense to accept the deal that was created rather than have the project be appealed at the Ontario Land Tribunal, which has historically been friendly to developers and could “take away lots of the good things that we got,” Macdonald said. She said, though, that the project will really change the area, whose tallest buildings are around 20 storeys currently.

“In the end, the board of the Deer Park residents group agreed to support the project,” she said. “The results were as good as we were going to get.”