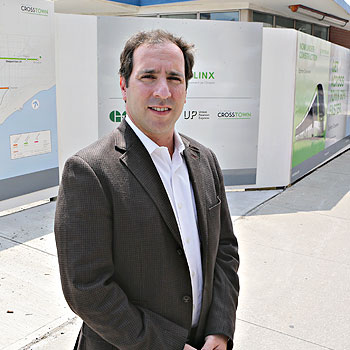 The Toronto Transit Commission’s (TTC) bus garage site at 24 Eglinton Ave. W. is bustling a little with life these days, but it’s still only a shadow of what Ward 22 councillor Josh Matlow envisions there for the future.

The property has been a bit of an eyesore in recent times, although it is now clad with Metrolinx panels, thanks to work by the councillor, to give temporary purpose to the land there. Behind those panels is the current staging grounds for the Eglinton Crosstown light rail transit (LRT) line construction. Matlow says it is a decent use for the site, for the time being.

“It’s finally something better than a vacant, dirty lot. It looks like it has a purpose now,” Matlow said about the property being used as a staging ground. “But it’s not what it should be, and I will continue advocating for a great public space there because that’s what great cities do.”

The property will continue as a staging ground until LRT work is complete, several years down the road, but Matlow said he doesn’t want that interim to slip by without working on development plans.

“Even if it’s 2020 [before LRT work there is done], it’s not that far off, and we have to keep on it,” he said. “Yonge and Eglinton for too many years has been built up as a concrete and glass tunnel, and that has to stop by creating a world-class public spot there (at 24 Eglinton Ave. W.).”

The land was due to be declared surplus in 2012, but that has been put on hold for the time being. Matlow said, once the impending municipal election is over and a new chair for the TCC is selected, that discussion of when the land will be declared surplus will begin again.