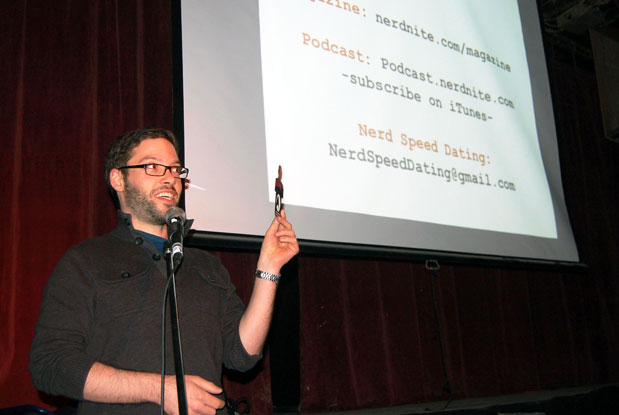 Nerds. They’re practically cool these days. And they’re gathering. Last week, Toronto nerds descended on a local community centre for a monthly get-together of learning and nerdy debauchery known as Nerd Nite. In between pints, they got schooling from brethren on just about anything a nerd may want to know about.

The first lecturer, biomedical engineering PhD student Justin Besant, gave a clever — and to those of us who are not engineers, entirely understandable — talk about microchips.

“You can put microchips in bugs and control how they move around,” he told the nerds.

Another nerdy tidbit: “Microchips are getting so small, we’re getting down to the point where the size of an atom will limit us.”

He explained that researchers (most likely, nerds) are working on replacing silicon, the material currently used for microchips, with graphene, a material that’s one atom thick.

“Layers of graphene form graphite,” Besant said. “When you write with a pencil, you’ve made the world’s thinnest material.”

Inevitably, someone in the crowd yelled, “who uses a pencil?”

That’s nerd debauchery for you.

That night, the bar lecture was given by Toronto writer Christine Sismondo, author of America Walks into a Bar: a Spirited History of Taverns and Saloons, Speakeasies and Grog Shops.

Sismondo gave examples about the role bars played in social movements, going back to the Salem witch trials and the Stonewall riots. She went from the gross (at one point, an entrepreneurial barkeep put urinals at the foot of his bar so that he wouldn’t lose customers who left to relieve themselves on the street) to de-bunking the myth that first wave feminists were responsible for prohibition in the U.S.

“The real money that shut down the bars was from the anti-saloon league trying to shut down labour groups,” she said.

At break time, concerned nerd citizen Daniel Moneta took the mike. He said he found a Jean-Luc Picard bookmark while leaving Spadina Station on his way over.

“It must belong to someone here,” he said. “Come see me.”

Nerd Nite started back in 2003, when a Boston hole-in-the wall asked a regular, ornithologist Chris Balakrishnan, to give a slide show about his recent trip to Cameroon to research the indigobird.

Like many Phd-ers who study ultra-specific fields, Balakrishnan wasn’t used to discussing his day-job outside of the lab. He grabbed the opportunity and apparently attracted lots of nerds. Nerd Nite blossomed, eventually spreading around the globe.

In Toronto, nerds have started speed dating. Sarah Rogers, the Toronto nerd speed dating organizer, said she is aiming to get 15 girls and guys together for the next night.

“We’ve done it once already, and had great success stories,” Rogers said. “People here have a lot in common.

The nerds are gathering. And soon, they’ll be breeding.

The next Toronto Nerd Nite event is scheduled for Feb. 23. Free (donation asked for lecturers).