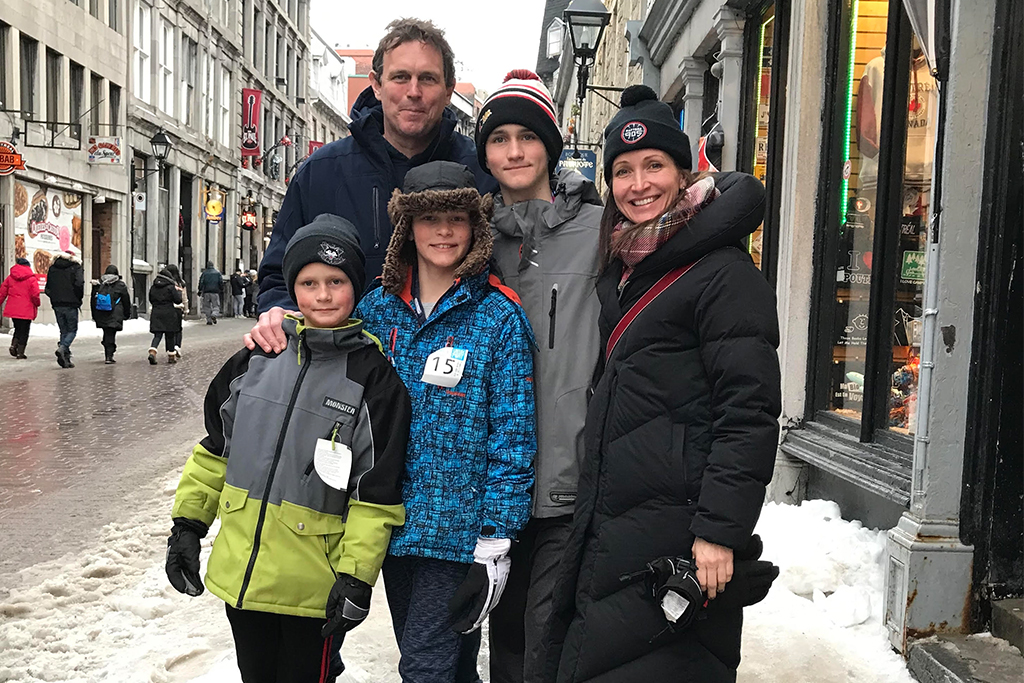 Michelle Nolden, known for her roles in Republic of Doyle and Saving Hope, is gracing TV screens yet again in The Wedding Planners. The series follows three siblings who are left to take over their mother’s (Nolden) wedding planning business. With all that wedding talk in the air, we decided to find out the story behind Nolden’s nuptials to husband Chris Szarka.

Michelle: We met at East Side Mario’s restaurant in Toronto where I was waitressing while studying at Ryerson University. Chris came in with a basketball teammate and ordered a lot of Italian wedding soup. I remember thinking he was very cute and funny, and I loved that he was so tall.

We met again briefly in an elevator, and he asked if I still worked at East Side’s, I said yes. Shortly after, I went home to my parent’s house for the summer, and Chris left a note with a fellow waitress asking if I wanted to meet for coffee.

She found the note in her purse four months later, and when I returned in September, she gave it to me. I was pretty sure it was that cute tall guy, so I called the number on the note, and, luckily, he was still single.

Michelle: We went to Jurassic Park at the cinemas at Market Square. We talked through the whole movie. He made me laugh — still does!

Chris: After the film, we went to a cool little bar on Front Street called C’est What and played backgammon.

Michelle: We dated for five years before we married, and in that time I travelled the world. Six months into our courtship I got a six-month contract entertaining on a cruise ship. We wrote each other letters, and every Friday, when we docked in Miami, Chris would wait by the phone for the one-hour window that I had to call. No one had email then, or cellphones. We had voice recorders that we’d record messages to each other on and then send those in the mail.

Chris: First I drove to Brantford to ask Michelle’s parents for their blessing. After bringing my parents into the loop, we invited all the Noldens and my whole family to my parents’ cottage. I planned something so big that it could only go wrong.

The plan was to take Michelle on a midnight paddle boat ride and propose. After she said yes, I was going to flash the shore with a flashlight, and our family members would set off fireworks and blast “Ode to Joy” across the lake. What could go wrong?

It was pitch black on the lake, and while paddling the canoe, a Jet Ski without its lights on was coming directly at us. I had to discreetly flash the Jet Ski with my flashlight and my mother yelled, “That’s the signal. Go!”

Fireworks took to the sky and Michelle said, “They have fireworks, and they’re not waiting for us!” I then proposed as dozens of people ran to the floating dock to shoot off champagne and greet us, only to have the dock submerge. It was truly an epic night.

Michelle: We were married in Brantford at the Hungarian Hall because it was the only place that could hold all of our combined family. We knew we wanted good food, an open bar and lots of people, so in order to afford that, we made concessions on other parts. I wore my mother-in-law’s wedding dress. My veil was huge, but it was perfect, and if I had to do it all again at that time, I’d do it exactly the same way. We went to Barbados on our honeymoon. It was fantastic.

Michelle: We started a film festival together called Lakeshorts International Film Festival. This year it will be celebrating its 10th anniversary. It’s a passion project for us both. And also our cottage and hobby farm, which we purchased two years ago. We’re pretty handy.

Catch Michelle Nolden in The Wedding Planners on Fridays at 8 p.m. on Citytv starting March 27.