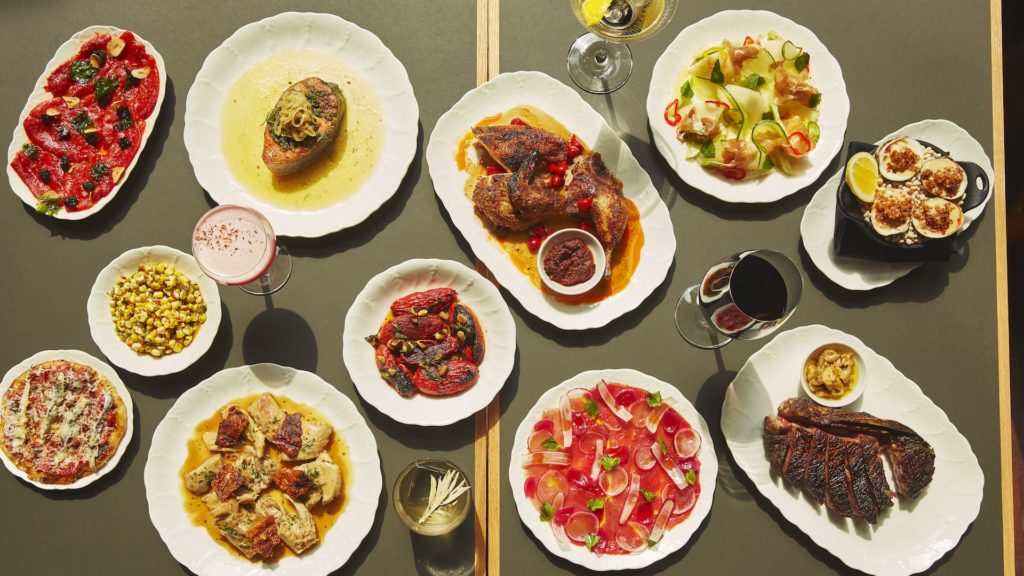 Alo’s Patrick Kriss has had a big week. The acclaimed chef and owner of Alo Food Group just earned a Michelin star for not one, but two of his restaurants – Alo and Alobar – as part of the new Michelin Guide in the city. And now, Alder, the latest offering from Kriss, has debuted at the newly opened Ace Hotel Toronto.

“Overall, it’s a menu that’s heavy on flavour, light on butter and classical sauces and is easy to share,” he says. “The char and the smoke from the grill and the oven add this elemental flavour to everything, too. It’s a lot of fun cooking with these flames every day.”

Many of the dishes are perfect for sharing and Kriss says they’re hoping to see lots of friends and families gathering.

“We also want to be here for the local community as much as possible and not just be exclusive to hotel guests,” he said.

Working with executive chef Devin Murphy, and pastry chef Victoria Ammendolia, Kriss oversees all dining menus at Ace Hotel Toronto that also includes the hotel’s community space and The Lobby, which offers a menu of pastries and coffee in the morning followed by alcoholic bevvies and small plates later on. Evangeline, a rooftop bar and lounge, is set to open later this year and will serve snackable finger foods and small plates.

Among the menu highlights are the half grilled chicken with harissa jus; big eye tuna with charred poblano aioli, and for dessert gluten-free coconut cream pie and dark chocolate and peanut mille-feuille.

With the aim to be an all-day hangout for Toronto, the lofty space is warm and inviting and features an open kitchen surrounded by concrete walls, brick floors and rich wood accents.

“The spirit and atmosphere at Alder matches the vibe at Ace Hotel Toronto, says Kriss. “We’re about being welcoming to all, and a place that’s easy and relaxed.”

As for what it is that sets Alder apart from the others in the Alo food group which includes flagship Toronto restaurant, Alo, as well as Aloette, Salon, and Alobar Yorkville, Kriss says that while they’re still in their early days, one difference is the dining room, which is their biggest yet.

“We’re feeling the energy that comes with a bigger room as it fills up, as the DJ kicks in on certain nights,” he said. “With this space we can welcome more people who might not have planned as far in advance to dine as they do at, say, Alo. So it’s a dynamic mix of guests who are treating Alder like a dining destination and those who happened upon it and want to have an impromptu great time.”

Alder is located at 51 Camden St. and is currently open for dinner  Tuesday to Saturday from 5 to 10  p.m. with breakfast, lunch and brunch to come.