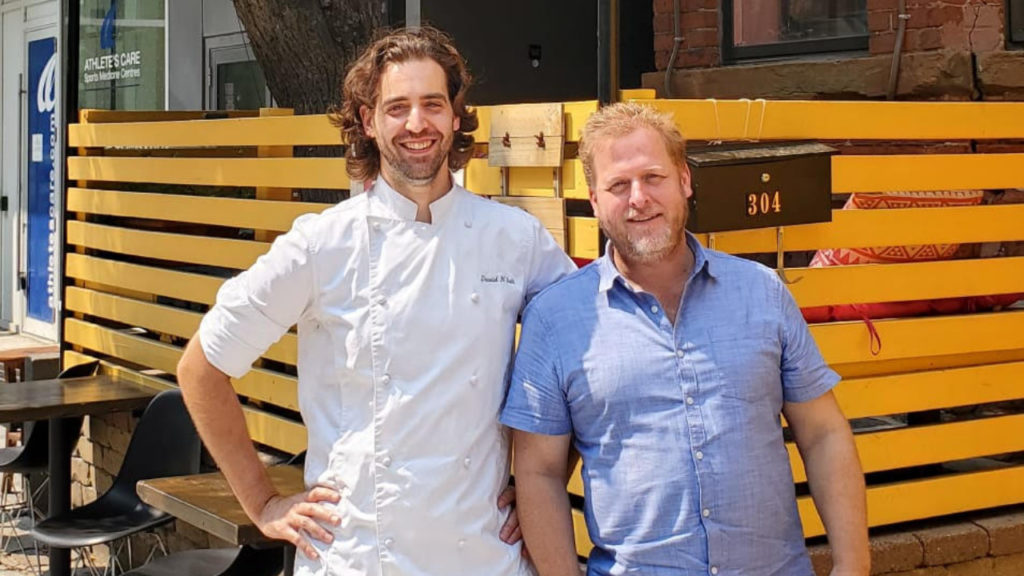 “Travelling truly does broaden your horizons — both in and out of the kitchen — and pushes you to think beyond the idea that seasoning, and life, is more than just salt and pepper,” says David Salt. “I have been extremely fortunate to have been born to a family who enjoyed travelling to and living in other countries. The biggest influence is being exposed to so many flavours, food cultures and people, which has shaped my own style and flavours.”

Born in Toronto, Salt grew up in exotic locations around the world, spending time in Canada, Papua New Guinea and the United Arab Emirates. He returned to Toronto for culinary school, only to leave again, this time to England, where he spent 14 years in kitchens of some stellar restaurants in the United Kingdom. That included Pascal Aussignac’s one Michelin–starred Club Gascon in London where he was awarded the role of head chef. He returned to Toronto in the summer of 2018 and began to host various culinary pop-ups around the city.

Fast-forward to the beginning of the pandemic when Salt found himself inspired. Having spent his whole culinary career working for someone else, the chef decided he wanted a change. So he tapped master sommelier Bruce Wallner, and an idea was formed — Drifter’s Solace.

“Drifter’s Solace did not exist before the pandemic, so I guess the influence the pandemic had was to push me to do something for myself,” Salt says.

And thus, Drifter’s Solace was born.

“I started with meal kits but always had the intention to have people sitting in at some point. The experience of cooking for people is impossible to replicate in a kit.”

Now, Drifter’s Solace is a unique, multi-course chef’s table experience serving a small collection of people at a time.

“I have always wanted to have a small place,” Salt says. “The space we have fits eight people comfortably, though we can take more if we move into the room next door, and once you get into those lower numbers, a chef’s table is a natural choice. The experience is more personal in a smaller place. It’s just fun.”

Located on Richmond Street, the chef’s table eatery shares a location with Grand Cru Deli and Sommelier Factory, each of which was opened by Wallner and predates the Drifter’s Solace opening. Before the pandemic, Grand Cru Deli was a restaurant, but with the pandemic the business pivoted to become more of a wine bar. A natural, given Wallner’s expertise.

“This left the kitchen space empty and unused. And that’s how I chose the space: it was an empty kitchen! And Bruce came with the building. It’s a good deal for me,” Salt says. “I like how out of place the building seems. It’s an old house sandwiched between two newer builds, and I like the small dining space attached to the kitchen, which makes the chef’s table possible.”

Calling the restaurant Drifter’s Solace, in a way, pays homage to Salt’s own life experiences.

​​”The name comes from the thought that we are all drifters in some small way or at least have the potential to be,” he says. “We move from place to place or job to job or even just from one stage in our lives to another. But there is always a yearning to seek out familiar comfort or solace, and that can often come in the form of shelter and a good meal. So Drifter’s Solace is just based on this simple idea that you can come in from the outside world to find food and drink and shelter.”

As for the decor, guests and diners can expect it to be simple and tasteful, without distracting from the taste of the food. The chef’s table is all about the experience of the cuisine, the enjoyment of the dishes themselves, rather than an extravagant, over-the-top showing. There’s also a level of privacy and seclusion to the space, as there’s no sign and it’s on the second floor of the house. It’s intended this way, creating more of a homey feel.

“I want people to feel relaxed and enjoy themselves, like they are in the dining room of a friend’s house. I think there is often a lot of pressure on guests and restaurant staff to act a certain way, which ends up seeming unnatural, which is not what I want,” Salt explains. “A big part of the experience we are trying to create is a little bit of an antithesis to the typical North American or Toronto restaurant experience. That is, most places are huge spaces with intentions of getting as many people in and out of the doors as possible.”

The menu itself changes to accommodate locally sourced, seasonal ingredients and is $125 per person. The day’s menu can be found on Tock, and the current offering includes, amongst other things, foie gras, rice pudding and eggplant peperonata available until October. Salt’s favourite dish, though, is an entree. He favours the lobster and glazed pork belly with corn veloute, he says, for a few reasons.

“It is the season for corn,” he explains. “There are a lot of opposing flavours, which come together well on the dish, and I have fun putting it together.”   Drifter’s Solace is located on the second floor of Grand Cru Deli, at 304 Richmond St. W. The restaurant accepts reservations on its website and through Tock.