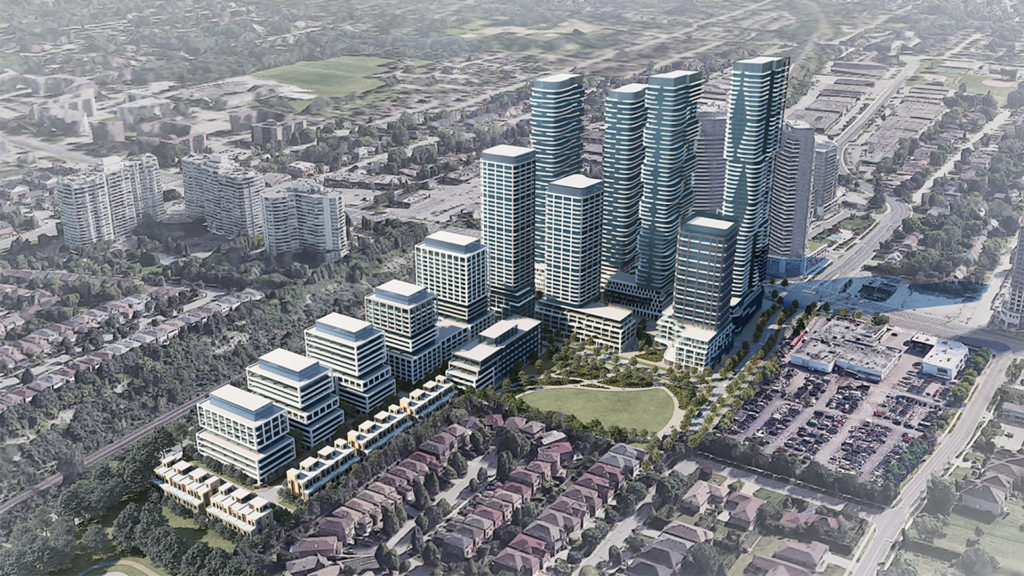 Another large complex is being proposed for the area of Yonge and Steeles following plans for a new subway station at the intersection.

An 18-building complex at 4700 Yonge St. is in addition to a 22-building site just a little south at Centrepoint Mall. The new proposal comes from a conglomerate of car dealerships known as Auto Complex Ltd., which aims to replace its outposts with a new community.

The 7.36-hectare complex would contain towers of 55, 50, 45 and 40-storeys along Yonge St., as well as 35, 30 and 25-storey towers to the west, separated by a public road. Eight to 20-storey mid-rises are also included, as well as three-storey townhomes to separate the complex and the low-rise residential streets to the west and south. The site would see 4,742 residential units in all, as well as 8,119 square metres of commercial space and a new public park.

The Yonge subway extension has drawn a huge amount of development to the area, with about 12 different developers offering proposals. Local councillor Alan Shefman hopes that the transit will ease any additional traffic, as well as new technology such as driverless cars that may be more prevalent once work is complete in a decade or so. Nevertheless, the complex at 4700 Yonge. St. is still looking for 2,430 parking spaces, matching about 50 per cent of the units.

A working group of residents, developers and planners has been created to help coordinate all of the new development. Shefman hopes that amenities such as community centres, schools and libraries can be integrated into the developments to make the area as liveable as possible.

“What we’re trying to do is build a collective vision of what the entire area will look like,” Shefman said. “I see it as a grand entranceway to the city of Vaughan.”

However, local residents of the primarily single-family homes in the suburban area are wary of the drastic change and how it will affect their lives and are not satisfied with the current amount of coordination.

With around 20,000 people potentially entering the area, Spring Farm Residents Association president Jordan Max said current residents are concerned about the traffic, spill-over into communities, as well as shadows from the tall buildings.

“We are alarmed by the volume, excessive heights and densities that are disproportionate for the area and we believe unnecessary,” Max said.