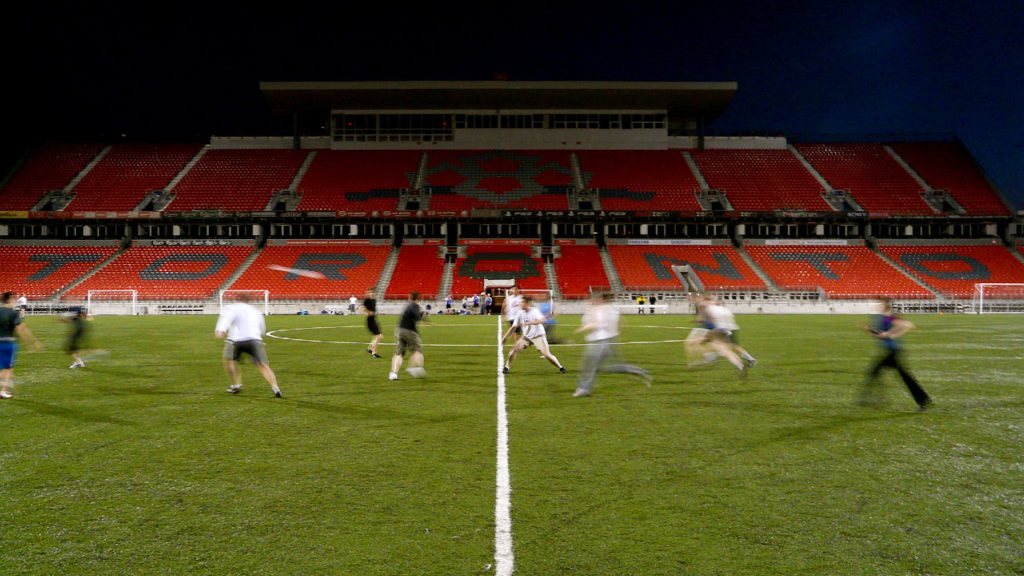 For some, frisbee is the ultimate in summertime serenity. Lazily tossing around a disc with some friends can be the perfect way to catch up with the latest in each other’s lives while enjoying the great outdoors.

The group playing frisbee at Varsity Stadium on one scorching August afternoon isn’t into all that. As heat waves radiate from the artificial turf, the Toronto Rush do battle with the Ottawa Outlaws in the American Ultimate Disc League’s Canada Cup tournament. A few hundred fans have congregated in the bleachers, along with a handful that peer through the gaps in the wrought iron fence that surrounds the field. In the middle of the action are James and Wilkie Lewis. For some, frisbee might just be a casual way to relax. For the Lewis brothers, the sport has been in their blood since birth.

The same rings true for their sister, Molly. A veteran on the Toronto 6ixers, she’s been on the city’s premiere women’s team since its inception in 2016. Since a monumental win over the Vancouver Traffic in 2017, the team has competed on both the national and international stage, as well as in the Club Women’s Division of USA Ultimate.

The trio were first introduced to ultimate by their father. A mainstay in club leagues and fuelled by a passion for competition, he instilled love for the sport in the trio of future superstars from a young age. “When we were really little, our dad would take us to his league games in Toronto,” Wilkie says. “We would be like his little cheer squad.” Their father even went on to coach James and Wilkie at the high school level.

Although high school wasn’t that long ago for the Lewis siblings, they still notice major differences in the way the game is played now versus back in the day. “There was a lot less integration in terms of fitness,” Molly said. “Practice was practice, but people didn’t lift weights, they just did track runs.”

As for what keeps the Lewises coming back to ultimate, it’s all about the community. “There isn’t a community I’ve ever experienced like the frisbee community,” James said. “People care about each other and want to see the sport grow.”

The communal aspect of ultimate ties in with the concept of the ‘spirit of the game.’ Described by Ultimate Canada as a “defining characteristic of the sport,” the spirit of the game is at the centre of any ultimate match and puts the onus of playing by the rules on the players as opposed to a third-party observer. “The spirit of the game instills in you a greater sense of belonging,” Molly says, “because you feel like everyone is on the same side at the end of the day. In other sports, you win at all costs and the onus is on someone else to uphold the integrity of the game. The fact that it’s given to the individual in ultimate is why we love the sport so much and why we feel responsible for its direction as players.”

One way that the Lewis family want to see the direction of the sport shift is in regards to inclusivity and accessibility for all. “The sport has started to recognize that it’s not as inclusive as it could be,” says James. “I think it’s one of the only sports that is starting to push more heavily towards inclusiveness compared to other sports.” Ultimate has recently advocated for more attention on the women’s game, as well as increased support for LGBTQ players and fans. “We want to make sure no group is left out,” James says, “and also broadcast to the rest of the world that this is something that can be done because that will encourage other sports to follow. We’re at a point right now where if that’s the focus from the beginning, then as it grows [inclusivity] can become a core part of the sport so that it becomes reinforced in the future.”

As we all know, nothing is immune to the pandemic, and the trio’s team schedules have incurred some serious impacts from COVID. Instead of playing a rolling schedule in the United States, the Rush are playing an all-Canadian schedule against Montreal and Ottawa. Their final game goes Sept. 4 in the nation’s capital. As for the 6ixers, the virus has kept the team away from the best competition down south, but they’re holding out hope that a trip to nationals could still be in the cards later on in the year. For now, the only firm date on their calendar is the Canadian Invitational in the first weekend of October.