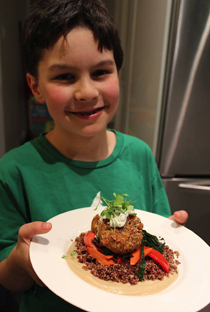 Lately it seems like anyone who’s anyone has a blog. And 11-year-old Ryan Storm is developing quite a following with his food blog, Ry’s Ratings. Since age 8, Storm has been trying out restaurants all over Toronto and reviewing his experiences. We recently spoke with him to get his views on eating organic, the best places find it and what an 11-year-old connoisseur does for fun.

How did you get into food blogging?
Well, it started with this red book that I have at home. When we used to go out to dinner I would go home and put ratings of the restaurants in there. I would rate the food, the service and the atmosphere. Then my mom suggested that I start putting them on a blog.

I understand you only eat organic, nut-free food.
My sister is deathly allergic to nuts so we don’t eat them. I eat organic because we want fresh food and to know where our food is coming from. We even squeeze our own orange juice at home. If we bought, say, Tropicana, we wouldn’t actually know where it was coming from.

What is you favorite type of food?
I really like Fifth Town cheese, because they made good, organic cheese and because I collect the stickers. I also like Kozlik’s mustard.

Do you have a favorite restaurant?
Yes, Belmonte Raw. They have the best raw burritos with nut meat and alfalfa sprouts. It also comes with amazing jicama fries.

A favorite chef?
Doug McNish. He’s a vegan chef and he makes the best potato salad in the entire world! He also makes really good sushi.

Does he work at a specific restaurant?
No, he’s kind of floating around right now. He has a cookbook that’s going to be coming out called Eat Raw, Eat Well.

What do your friends think about your blog?
They’re fine with it. They don’t tease me about the things I eat or anything. Sometimes they try it and say it’s really good.

Have any of them tried new things because of what you’ve put on your blog?
Yes, a few of them.

What do you like to do in your downtime?
I read a lot. I also like to listen to my iPod. I like Phish. And I play piano.

Would you like to do something food related at all?
No. A musician.

Really? Would you play the piano professionally?
Yeah.

Do you have any plans for the future of your blog?
It’s a secret.