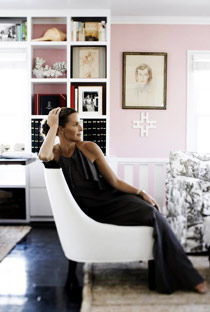 Have you ever wondered what it might be like to be an ex-model who rolls with the royals? And by roll we actually mean be related to them? How about to also reside full-time in the Bahamas, plus have a successful jewellery line? Well, we wonder these things regularly, and if you do too, we suggest heading over to Holt Renfrew on Bloor this afternoon to personally ask the lady who would know: India Hicks.

The British-born jewellery designer is the daughter of David Hicks, the famed interior decorator, and Pamela Hicks, the daughter to the Earl and Countess of Mountbatten of Burma. Her grandfather was the very last Viceroy of India (he gave the country its independence in 1947) and her godfather just so happens to be The Prince of Wales. Fun fact: she was a bridesmaid to Charles and Lady Diana at their wedding when she was 13 years old.

Not bad, huh? Currently, Hicks resides in the Bahamas with her husband and four children, but she’s taking a break to join us in chilly Toronto to share her special assortment of trunk show pieces, alongside her collections Love Letters, Hicks on Hicks and Island Life.