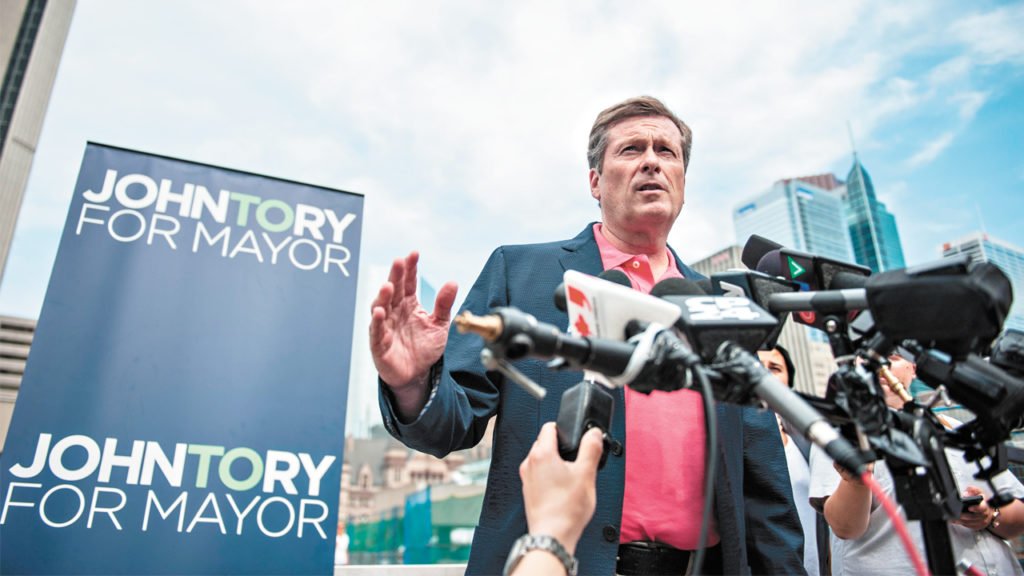 It’s great for Mayor Tory that he will be running in the next mayoral election unopposed, but it is not as great for the city.

Elections are messy, expensive and sometimes bitter, but they are also opportunities to raise issues that matter to the people who live in the city. Now that the position of mayor holds more power than ever before, by virtue of a reduced council, election debates become even more significant. Tory cannot assume that he has a mandate for anything if he runs unopposed.

There are many issues facing Toronto. Some are big ones, such as affordable housing.

Some are less so, such as where bike lanes should go. Others are symbolic, such as renaming Dundas Street as a response to systemic racism.

The big issue of affordable housing is not an issue that any mayor can resolve, but Tory should definitely resist raising the Land Transfer Tax as a way of dealing with the city’s unsustainable budget.

If the mayor is going to bring in any new revenue tools, otherwise known as taxes, he should be forthright about it during the election cycle.

Congestion is another increasing concern in the city and is increasingly becoming a topic of conversation. The amount of congestion in our city streets will only get worse as people return to the office in greater numbers.

It would be safer for everyone without the on-street parking.

Then there is the decision to rename Dundas Street.

I have lived in Toronto my entire life and I never knew that Dundas Street was named after an incompetent racist that was born in 1792. I have now learned that Lord Dundas was, by all accounts, a ne’er-do-well. Without question, I would not choose to name a street after him; however, that is not the choice.

The choice was made to rename the entire street, street signs, transit stops and anything that includes the name Dundas, including Yonge-Dundas Square.

Is this the same as removing a statue? It seems to me that this might be an expensive and emotionally taxing exercise that gives the dead man much more than he is due.

There are many other ways to express outrage at his views that don’t involve changing the address of over 7,000 properties along the 23 kilometres of the street.

It is arguably a token symbol that might make people feel better in the moment but does little to address the real issue of racism in our city. A mayor understands that some symbolic gestures are important and some are self-defeating. A strong mayor doesn’t confuse the two.

Since the mayoral race is all but decided, people should focus on local races for city councillor. Several veteran councillors have retired, leaving a void of talent to lead on council. Electing strong local representatives will be good for communities and for city hall.