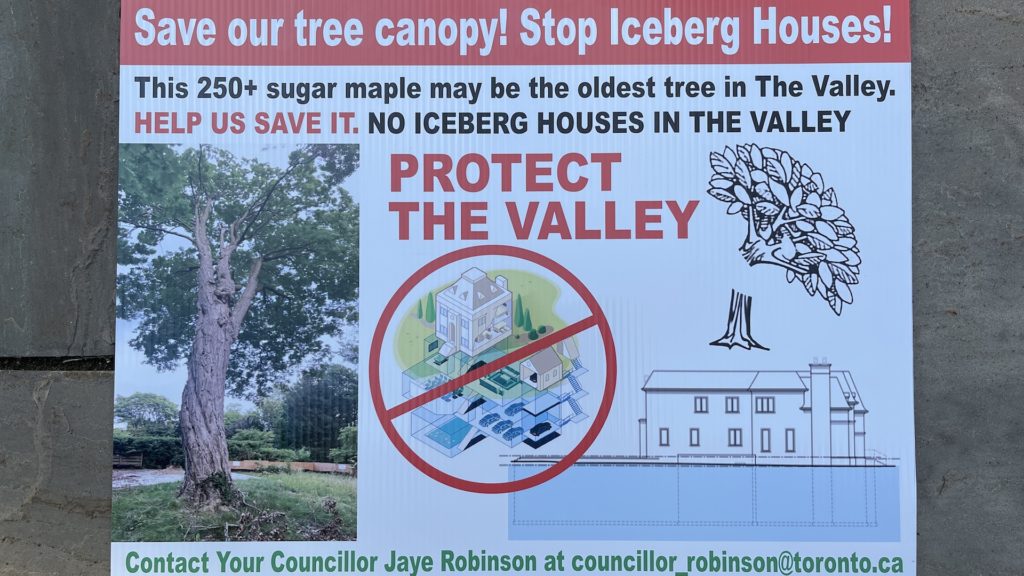 Hogg’s Hollow residents Shannon Rancourt and Laura Lamarche knew something strange was happening in their neighbourhood after a heritage home was demolished without a city permit during the May 24 long weekend.

“It really rattled us, that things like that could easily happen,” Rancourt said.

Then one day in July, while they were both walking their dogs, they noticed some activity happening at 7 Knightswood — a home Rancourt said has been abandoned for about five years.

A massive 200-year-old sugar maple tree, which she said is likely the oldest tree in the heavily green neighbourhood, had been cordoned off.

Soon, Rancourt and Lamarche embarked on their own investigation that Rancourt describes as “peeling an onion.”

“The deeper we went with it, the worse it got.”

They soon discovered that 7 Knightswood was set to be replaced by a house with a massive, two-storey basement that Rancourt describes as a “party palace,” complete with a basketball court, a karaoke bar, a stage with a golf simulator, three bedrooms, four bathrooms, and a five-car garage.

The underground “mausoleum” is even bigger than the above-ground plans for the house — a trend known as “iceberg houses.”

While instances of these houses are beginning to pop up around Toronto, London, England, has already introduced laws to limit them given their potential to structurally disturb neighbouring houses.

Local councillor Jaye Robinson said there have been reports that iceberg houses can cause shifting foundations, collapsing ceilings, and sagging floors.

That’s not to mention environmental concerns from such homes, including reduced soil permeability, stormwater runoff, and potential for erosion.

These concerns are even more pressing in environmentally sensitive areas like Hoggs Hollow, which is in a floodplain and is especially prone to flooding given the Don River flows through it.

Nevertheless, the development at 7 Knightswood was still given the green-light in late 2020 by the city’s Committee of Adjustment — a group made up of citizen members that review applications for minor variances and consents — despite a recommendation by the city’s Department of Urban Forestry to refuse the application as it threatens the tree in its backyard.

“It’s a tragedy because the tree will be removed … and it’s simply because of this massive basement,” Robinson said. “We’re losing this iconic tree in Hogg’s Hollow.”

She said that this decision is the latest in a concerning trend from the committee to make questionable judgments, and is pressing for it to be “thoroughly reviewed.”

Robinson will also be introducing a motion to the city council this fall to try to prevent iceberg houses from being built as there are currently no city bylaws to rein them in — they are a “blindspot,” she said.

In the meantime, city staff said there is no way to reverse the decision, according to Robinson.