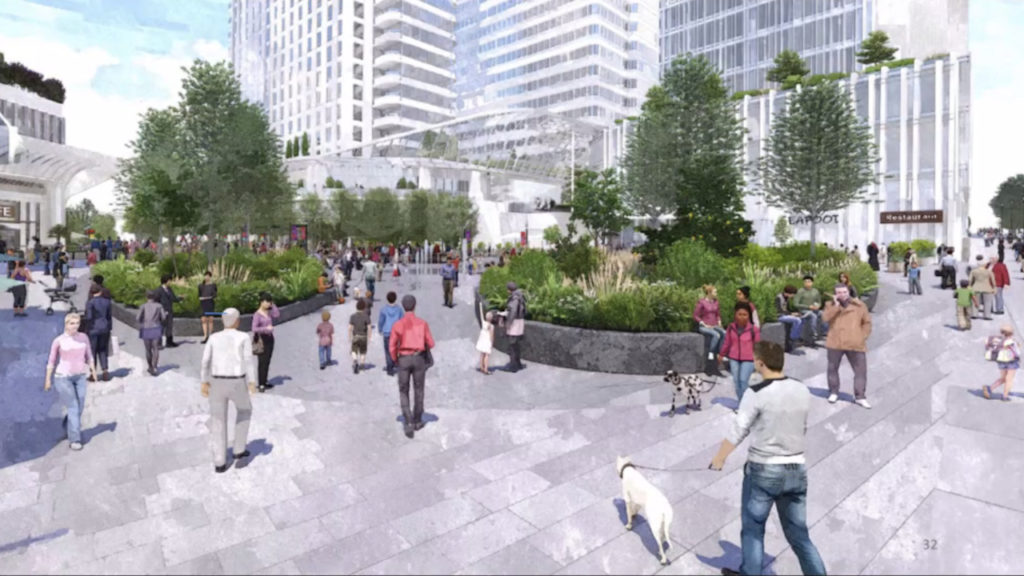 New plans have come to light for a massive new community at Yonge Street and Eglinton Avenue after significant community feedback. Developer Oxford Properties revealed the reworked vision for its Canada Square project at a community Zoom meeting in early December, along with Hariri Pontarini Architects.

The new plan includes a huge new public park that is more than double the size of what was previously proposed in 2020, up from 1,800 square metres to 4,200, as well as five highrise towers ranging from 45 to 65 storeys tall that will be home to up to 2,700 new residents, a new public square and a glass-ceiling promenade complete with retail.

The new plan aims to create a “quilt” that easily transitions between urban and natural elements, Oxford said, after the community said there should be a larger public park and central gathering space.

The plan also includes a levelled plaza with stairs at the southwest corner of Yonge and Eglinton to a TTC and LRT entrance. Oxford said they are in talks with Toronto District School Board and Toronto Catholic District School Board on potentially including a school in a 5,000-square-metre community space.

A school was one of the main features the plan lacked. Last year, Shelley Laskin, the TDSB trustee for Ward 8, Eglinton-Lawrence and Toronto–St. Paul’s said a new elementary school in midtown is a critical piece of infrastructure, especially given the rapid population growth in the area and on this specific site.

“Students that will reside in these dwellings cannot be accommodated at Eglinton Junior PS,” she said, adding that elementary students may need to be bussed out of the community to other elementary schools.

Local councillor Josh Matlow, who attended the virtual meeting, said that the new plan is “night and day” from the old one, and Oxford has achieved “real and meaningful progress.”

He said Oxford listened to the community feedback by increasing the size of the park and plaza, and the plan now feels more open to the adjacent streets rather than closed off. “There’s so, so many improvements to [the plan],” Matlow said. “I really got to give it to [Oxford].” There are still improvements to be made, though, Matlow said.

Although the proposed public square, Canada Square, is roughly the size of Yonge-Dundas Square downtown, Matlow feels the comparisons should end there and the space should be vibrant rather than a pad of cement.

“Toronto has a shameful legacy of reaching for the height of mediocrity,” Matlow said. “We have an opportunity to do so much more here.”

Former South Eglinton Davisville Residents’ Association president Andy Gort, who has worked closely on this file through its evolution, said that the extra park space is appreciated, but the residents remain cautiously optimistic over the plans until they see the whole proposal once it is submitted to the city.

“We want to have everything on the table,” he said.

City of Toronto staff will next create a report on the proposal, which will then be sent to the city’s planning committee and next to council for it to be voted on.

The construction would be done in three phases, beginning with a 65-storey tower near 2200 Yonge St. and the plaza, followed by the public park, square and three more towers, and then finally the fifth, a 55-storey tower in phase three.

The building at 2200 Yonge St. will be kept in the updated proposal, in keeping with one of the priorities of Oxford pertaining to a consideration for embodied carbon and sustainability that stemmed from the dialogue with the community.

Matlow did point out that construction on the property won’t begin until the LRT is finished, and, as he recently revealed from Metrolinx documents, there is no concrete plan of when that will be.